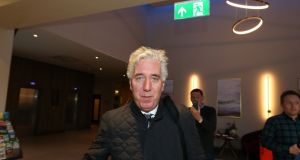 John Delaney leaving the Carlton Hotel near Dublin Airport on Monday evening after a meeting with the board of the FAI. Photograph: Colin Keegan/Collins Dublin

Those who have paid any close attention to his career up will be reluctant to write him off but John Delaney’s days at the FAI do look to be over. Having to step aside, however voluntarily, “pending the completion of an independent investigation by the association into issues of concern to the board”, is not a fate he would have expected to befall him even a few weeks ago. The question now appears to be: on what terms will he eventually depart?

The stakes are high for both sides as the terms of any deal are also likely to be major factors in the ability of the surviving board members to stick around for the long term.

There have already been many calls for all on the board to walk away. But the very clear sense given by association president Donal Conway, in front of the Oireachtas Committee of Transport, Tourism and Sport last week, was that he believes he is part of the solution here and none of the others has given any indication they are inclined to fall on their swords.

In the short term, there is also a practical aspect to it all. The quorum required for valid meetings is seven and after following on from Delaney’s resignation as a director a couple of weeks ago, the departure yesterday of honorary secretary Michael Cody and honorary treasurer Eddie Murray leaves only eight serving directors. If they are not careful, they are going to struggle to get anything much done at a time when the association is still deeply embroiled in a grave crisis.

Somebody, in other words, has to be steering the ship right now, however poorly suited to the job they might seem to outsiders. Still, they will surely do well to retain their positions when the immediate business of getting through the next few weeks has been completed.

Matters might have seemed more straightforward at this point had they been able to do a deal with their former chief executive over the weekend, and it was widely believed that one was imminent on Saturday evening. There is a belief that the terms on which he was prepared to go were unpalatable to several members of the current board who were mindful, perhaps, that keeping them confidential afterwards could scarcely be regarded as a realistic prospect.

The revelations in the Sunday Times regarding Delaney’s expenses would have added considerably to their difficulties. The two men authorised to sign off on them under the FAI’s rules were the ones to go yesterday, with Cody and Murray both said to have “voluntarily resigned”.

The two 79 year-olds had been directors of the association since January 2004 and were regarded as having been close allies of Delaney’s over the long term. Cody had passed up the opportunity to take the top job on himself in 2004 on an interim basis so as to allow Delaney establish himself in it and he was on the interview panel in 2005 that gave him the job on a permanent basis.

More recently, Delaney had helped to change the rules of the association so as to allow the pair to stay in their roles despite their ages. But they were due to go when their current terms of office concluded as a result of new term limits having been adopted in January. The fact that they had to resign early, though, is a blow, both for them and the man whose grip on the association they helped to secure and then maintain over more than a decade and a half.

Delaney’s departure seems unlikely to be too far behind and the role of executive vice-president may yet prove to be one of the shortest lived in the long and colourful history of the association. Few in football will be taking anything for granted quite yet, however, and the 51 year old is unlikely to have given up yet on securing a new future for himself at Uefa.

There is no reason at this stage to suppose he will be considering his position there although Germany’s Reinhard Grindel, a vice-president of Uefa and until very recently fellow executive committee member, resigned only last week over a number of financial issues including the acceptance of a designer watch from the Ukrainian president.

As things stand, Delaney retains his “ExCo” membership until April 2021 but the loss of his current position at the FAI, effectively created just to allow him to run for re-election then, would likely mean the loss of his seat.

There has been talk that he sees himself in a different, unelected role there in the not too distant future.

That too seems a lot less likely than it would have a few weeks ago – but never say never where Delaney is concerned.