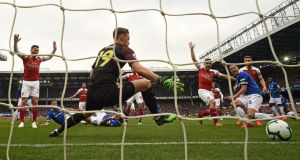 Just when it seemed Arsenal had discovered the resolve and momentum to propel themselves into next season’s Champions League they reverted to being, well, Arsenal. The old flaws of recent years – weak defending and character in particular – returned to ruin Unai Emery’s hopes of tightening his grip on third place at Goodison Park.

Everton were more comfortable and deserving winners than the scoreline suggests. Phil Jagielka, a late inclusion in Marco Silva’s starting lineup, pounced early to give the hosts a third consecutive victory and their second in successive home games against a member of the so-called ‘Big Six’. Silva’s side were dynamic, industrious and resilient in every department.

Arsenal were found wanting on every score. They have recorded only one away win in the Premier League since November and with only two of their remaining six matches at the Emirates Stadium the biggest obstacle to their chances of rejoining the European elite is obvious. Emery’s latest attempt to remedy the sequence was as ineffectual as his team.

Jagielka was summoned into the starting lineup only minutes before kick-off after Michael Keane fell ill during the warmup. The 36-year-old has endured a frustrating campaign on the sidelines, with injury and heightened competition restricting him to only three league starts, but that was forgotten as he swept Everton into a lead their first-half display richly deserved. The breakthrough reflected much of the opening 45 minutes – direct and effective by the hosts, weak and careless from the visitors.

Lucas Digne, who was also feeling the effects of a virus before kick-off, launched a long throw into the Arsenal penalty area that Jagielka won comfortably. Dominic Calvert-Lewin won the second ball with a diving header that deflected back to the veteran defender and, onside and unmarked, he beat Bernd Leno with a close range finish. The early setback for Arsenal continued their record of conceding in every league game on the road this season, the only club in England’s top four divisions to do so.

Everton remained in control for much of the first half. Their workrate has improved immeasurably along with their form in recent weeks and the confidence in their play was typified by a lovely backheel from Bernard that released André Gomes and Kurt Zouma performing stepovers during one determined run. Gomes was immaculate in central midfield. Calvert-Lewin is developing as a young centre-forward of promise by the game. Only Richarlison struggled and several inviting situations for a second goal went astray down his right flank.

But Silva’s team were given licence to dictate proceedings by Emery’s 5-3-2 formation and decision to omit Aaron Ramsey and Pierre-Emerick Aubameyang from the starting lineup. The introduction of both at the start of the second half, and switch to 4-3-3, was the manager’s admission of his own mistakes. The brittle defending and lack of movement was entirely the responsibility of his players, however.

Arsenal improved as an attacking unit after the interval and Ramsey could have levelled when Jordan Pickford’s weak punch over the top of Alexandre Lacazette dropped into his path inside the area. The midfielder’s volley sailed harmlessly over and the chance to wrestle the initiative early in the half went with it. Emery’s side still had their moments, Henrikh Mkhitaryan shooting inches wide of Pickford’s far post, but Everton were the brighter, stronger and more dangerous unit throughout. Only their failure to land a second blow on Arsenal’s glass jaw kept the contest alive longer than it should have been.

Bernard was presented with a clear run at Leno’s goal when Ainsley Maitland-Niles miscued a header towards his goalkeeper. The angle and the bouncing ball were awkward for the Brazilian and the Arsenal keeper saved comfortably at close range. Gylfi Sigurdsson, tireless alongside the mesmerising Bernard and Gomes, had several opportunities to convert from well-timed runs into the area. One volley was driven over, a shot from Richarlison’s cut-back was straight at Leno and a third effort was blocked by Sokratis Papastathopoulos. The rebound on that occasion dropped perfectly for Richarlison only for the Brazilian to slice horribly wide.

A cynical foul by Shkodran Mustafi on Calvert-Lewin prompted an angry exchange between Silva and Emery on the sidelines. Mesut Özil, substituted by this stage, appeared to throw his jacket at the Everton manager as others became involved. It was a rare – and pointless – show of aggression from Arsenal’s captain on the day. It was befitting of the Arsenal performance. – Guardian service