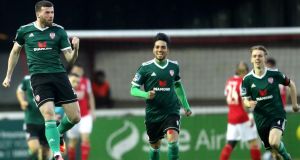 Derry started on the front foot and were rewarded with the lead inside two minutes.

Greg Sloggett laid the ball off to left back McClean to strike a shot that seemed to deceive St Pat’s goalkeeper Brendan Clarke, squirming under him into the far corner of the net.

An 18th minute foul on Darren Cole brought a free kick some 25 yards out which Argentinian midfielder Bruna whipped up and over the wall and into the bottom left of the net.

Derry then extended their lead further on the half hour when Cole’s flighted cross from the right found Ogedi-Uzokwe, who swept home his first league goal for the club.

St Pat’s got a goal back within two minutes, Gary Shaw meeting a Simon Madden diagonal ball from the right to glance a diving header past Peter Cherrie to the net.

In a slow burner of a second half, Derry were first to threaten just before the hour mark.

Eoghan Stokes found space on the right to arc over a pacy cross which David Parkhouse flicked wide.

To their credit, St Pat’s worked hard to play their way back into the game with Shaw inches wide with another header from a Madden delivery on 65 minutes.

But the damage had all been done in a madcap first half.

While clear-cut opportunities were few and far between early on, it was the visitors who eventually broke the deadlock on 35 minutes. Following Shane Griffin’s precise corner on the right, centre half McLoughlin was on hand to scramble home.

The Leesiders continued to offer the greater attacking threat with Morrissey firing just past the target on the resumption.

However, they suffered a significant set-back in the closing stages when Comerford was red-carded for a dangerous challenge on winger Neil Farrugia. This increased the tension in the south Dublin venue and UCD wiped out the City lead when Mark McNulty allowed Mahdy’s speculative shot to slip through his fingertips on 85 minutes.

This looked set to give the hosts a share of the spoils, until O’Neill last-gasp intervention provided a final twist to the tale.

Both sides left the Showgrounds with a degree of satisfaction as Sligo Rovers and Waterford played out a scoreless draw.

The home side built on Friday’s defeat of Dundalk with another good display, while the sizeable away support in the crowd of 1,528 were happy to see their side make the long journey back home with a point that keeps them ahead of their opponents.

The strong wind made any sort of decent football very difficult, though the visitors had the better of the few chances that were created in the first half.

The early stages of the second half promised more, with David Cawley forcing a save off Waterford goalkeeper Matthew Connor with a stinging shot in the opening minute.

But Waterford had two quickfire chances to take the lead at the other end from successive corners. Firstly Rory Feely should have done better when picked out unmarked inside the area. And then Kevin Lynch flashed an effort across the face of goal from another Zak Elbouzedi in-swinger.

Rovers called on Liam Kerrigan and Romeo Parkes from the bench and it almost paid instant dividends, as the latter set up the former inside the area, but Connor made the stop.

And the final chance went the way of Elbouzedi, who smashed a late effort goalwards only for Beeney to again make the stop.

Here is your handy guide to sport on television this week 21:45
Che Adams chooses the perfect time to open Southampton account 21:36
IRFU in line for €75m windfall as CVC acquire 14.5% Six Nations stake 21:23
Séamus Heffernan given 22-day whip ban by Chantilly stewards 20:12
Zinedine Zidane: ‘I’m tired of people saying we are winning because of referees’ 19:54