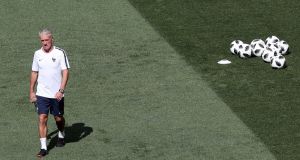 Didier Deschamps: manager insisted at his press pre-match conference that “there is no ambiguity here, we want to win and the players must do everything in their power to achieve this”. Abedin Taherkenarech/EPA

At the time, Didier Deschamps must have been disappointed: France had taken their time to settle but eventually scored and then shown firm signs of imposing themselves inferior opponents.

But still the scoreline last Thursday in Yekaterinburg was just 1-0 and his side had had to defend long and hard through the second half against Peru just to get away with the win.

If he has taken the time for even a passing glance over the English media’s reaction to their side’s 6-1 defeat of Panama on Sunday, though, the former Monaco and Marseille boss might regard the narrowness of his side’s second group stage victory as something of a godsend.

There remains a sense around this French side, though not an extravagant one, that they might be building towards something good, even great, but that there is work still to be done if they are to achieve their collective potential. The fear with England must be that their best day at this World Cup, the one which they most pleasantly surprised people, might already actually be behind them.

Both sides are through to the second round, of course, and taking six points from six represents solid work so far.

Yet while there is suddenly talk of Gareth Southgate’s side bringing the title home, the French press have been much more circumspect in their assessment of where the team stands and the how the coming weeks might pan out for it.

Things might well have been different, to be fair, had they built on Kylian Mbappé’s 34th minute tap in against Peru and grabbed a few more goals themselves. For a short while, that seemed inevitable. Mbappé himself looked to be full of confidence and, as he had against Ireland a few weeks back, revelling in the opportunity to slip past opponents or send team-mates on their way.

Some of the passing and movement involving the 19-year-old, Antoine Griezmann and Olivier Giroud as the French broke forward was sublime, even if the finishing fell short, and through that best spell the control exerted by Paul Pogba and N’Golo Kanté in central midfield was almost complete.

The break came at a good time for Peru, though, and after it they embarked on a spirited pursuit of the equaliser they required to have any chance of staying in the competition. It made for a different type of test of Deschamps’ side but one they came through well. The South Americans dominated in terms of chances but a back four that many have expressed reservations about stood their ground.

Hugo Lloris saw his woodwork rattled from a long way out but not much else. His centre backs were solid and, in front of them, Pogba played with plenty of defensive discipline. Blaise Matuidi, handicapped by the early yellow he had had to take in order to stop a run by the much quicker Luis Advincula, didn’t provide the sort of cover that would have been hoped by his full-back Lucas Hernandez but he got through well enough too in what was only his second ever senior competitive international.

The 22-year-old, who plays his club football with Atletico Madrid, adds more on the attacking side of things than Benjamin Pavard over at right back but both are players that the French are hoping to will grow into this competition. And Raphael Varane, who will captain the side against Denmark, spoke on Monday of the potential for the group to benefit each and every day from the time they are “living and and training” together.

Still, the more commonly asked questions about the side’s potential to actually win this tournament revolve around its biggest stars and the coach’s ability to get the best out of them. Deschamps chopped and changed through Euro 2016, switching between 4-3-3 and 4-2-3-1 and he has started in the same vein here with. The latter is inclined to restrict Pogba but afford Griezmann more of an opportunity in the central space behind the striker to open up the opposition defence.

Whether the manager will settle on one approach or another in the latter stages may not be all that much more clear after Denmark. He insisted at his press pre-match conference that “there is no ambiguity here, we want to win and the players must do everything in their power to achieve this”.

But the changes anticipated suggest a slightly more relaxed outlook with the Deschamps keen, it seems, to give at least a few of the peripheral players a run out.

That might allow a Denmark side built around Christian Eriksen to nick top spot but a point would be enough for both sides to progress and while first place is likely to bring with it the prize of avoiding Croatia, it would be no great surprise if both show signs of settling for things as they stand.

If omens were what mattered, winning might seem that little bit more important; the French beat the Danes in the group stages of both France 98 and Euro 2000, each of which they went on to win. Deschamps was captain back then but was rested for the game in Lyon by Aime Jacquet as the hosts were already through.

Here a draw might suit him and his side rather well.

France have ultimately been beaten in their two most recent tournaments by the side that went on to lift the title and the 49-year-old will be acutely aware that there are sterner tests ahead. At some point they are indeed going to step things up another notch or two if they are not to go out to a good side again. In the meantime, he has seen however, winning big wins can come at a cost.

1 Inside the world’s largest sports air dome just outside Knock
2 ‘Embarrassment, anger, sadness’: the decline of the great Stephen Hendry
3 Worst sporting moment: White knuckle ride on a hate-filled night at Windsor
4 As ever, Ronnie O’Sullivan sparks debate at the Crucible
5 Shane Lowry has work to do to make FedEx Cup playoffs after 70
Real news has value SUBSCRIBE
Crossword Get access to over 6,000 interactive crosswords