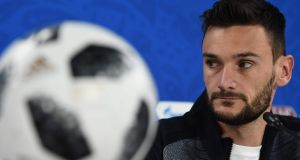 France’s goalkeeper Hugo Lloris during a press conference at the Ekaterinburg Arena on the eve of the game against Peru. Photograph: Getty Images

A matter of weeks after Hugo Lloris suggested that his Tottenham teammates needed to ask themselves a question or two over the summer months about what he perceived to be a lack of mental strength and physical aggression, he was saying much the same about France in the wake of their display in their opening World Cup game against Australia.

The difference this time is that with the cup here still there to be won, it is not too late to put the problem right.

The French skipper, whose performances against Ireland in 2009 played a huge part in deciding that World Cup play-off, will earn his 100th cap against Peru in Ekaterinburg on Thursday afternoon, his 76th as captain, but insists the honour is very much “a secondary consideration” just now.

Didier Deschamps’ side have one foot in the second round, and can pretty much plant their other one on the knockout stages with another win. Yet the 31-year-old believes the South Americans are made more dangerous by their need to win, while he and his teammates had plenty to work on in the wake of their opening game success.

“The initial match is important, but difficult,” he says. “We have seen that with some of the others who have broken their teeth in their first match. We did well, but there are things that need to be improved. We have talked about those amongst ourselves and with the coach, and we are trying to work on them.

“Peru deserved better against Denmark. They are a quality team , difficult to play against and difficult to beat, It was their first defeat in 10, I think (16, in fact). Now we know they will have even more motivation, and they want to go make another step up. There will be a lot of intensity and aggression. It is their last chance to go into the group stages, and so they will have to give everything. We will have to raise our game.”

Just about everybody agrees on that after a game in which Australia put it up to the former champions, curtailing their ability to play to their strengths for long spells by working hard to limit the amount of space they had to work in. Australia also tested French resolve when they had half a chance from the occasional set-piece, a department in which the French looked suspect, their captain acknowledges.

“Nothing can replace aggression. and it was missing for the whole match. We have to be more solid on that front because we have had a few difficulties, a few situations that were a little scary for us against Australia, and they were all from set-pieces, so we have to address this. We have to be realistic and precise.”

Deschamps seems set to bring back Blaise Matuidi and Olivier Giroud for Corentin Tolisso and Ousmane Dembélé, with Kylian Mbappé reverting to the right side of the team’s attack where, the coach seems to feel, he can be more effective.

A final call on Giroud’s return, he claimed, would only be made in the run-up to the game, but the French have been preparing with the Chelsea striker in a side of likely starters. Deschamps suggested there was a touch of the “can’t live with him, can’t live without him” about the 31-year-old when he observed that “sometimes when he plays Olivier seems to be on his own wavelength, not the same one as the others, but then when he is not there you realise how useful he can be”.

The Peruvians have no such doubts about the importance of their own star striker Paolo Guerrero, whose presence at this World Cup may have been facilitated in part by a letter from Lloris and the group’s two other team captains to Fifa asking for clemency after a ban was imposed in the wake of a positive test for cocaine.

The veteran Flamengo striker came on against the Danes and seemed to spark an improved performance in the wake Christian Cueva’s missed penalty at the end of the first half. Their dominance down the right in that game generated a handful of second half chances, and appears to have played a part in Deschamps recalling Matuidi, who will look to limit the scope of right back Luis Advincula to press forward.

The South Americans’ exit would be lamented by the hosts with their huge support proving popular here, but their Argentinian coach conceded that their most likely route to the next round had been by way of a win over Denmark.

“I don’t know if we will be on the same level anywhere to be honest,” he conceded when asked where they might get the better of the French. “But we believe that we can be a tough nut to crack. We won’t want to let them push us around, and we will also try to be true to our own style of play. Ultimately we want to win the match. That much is clear.”

1 Serpentine stays on from the front to steal Epsom Derby for Aidan O’Brien
2 Eamon O’Shea: We spent quite a bit of time talking about older people rather than to them
3 Love tears them apart in stunning Epsom Oaks romp
4 Monica Seles: The warrior queen who could have been the best ever
5 Arsenal check Wolves to relight their European fire
Real news has value SUBSCRIBE
Crossword Get access to over 6,000 interactive crosswords