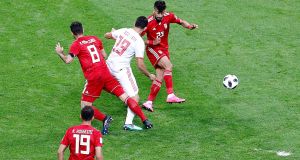 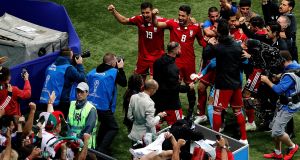 Iran’s players celebrate a goal that was ruled out for offside by VAR. Photograph: Sergey Dolzhenko/EPA

Amid the din, Iran’s footballers collapsed to the floor exhausted and someone decided to put Y Viva Espana on the PA system. Spain had lived, but dangerously. Iran had been defeated, but only just.

Three times Carlos Queiroz’s team might have scored: the first had hit the side-netting, subs and staff running from the bench before they realised it had gone wide; the second was ruled out for offside, but not before celebrations were well under way; and the third flew over the bar from six yards, Mehdi Taremi barely able to believe it.

Fernando Hierro’s team, meanwhile, did score, but only once. And when the breakthrough came, for all the football, for all the intent, it did so via Diego Costa’s knee.

The fortune Iran had enjoyed in the first game against Morocco deserted them. It also forced them into a change of plan that almost worked too, the talent brought to the fore. As for Spain, they secured a victory that leaves them well-placed to progress now.

After a first half when they had the ball but were unable to produce the goal they needed, Spain got it early in the second. They needed it, but had not always looked like getting it during an opening 45 minutes in which Iran had played deep, waited, defended. Spain had expected that but they had not found a solution for it.

In part, that is because Iran do it well. Unbeaten in four years of competitive matches, they had played 22 times without defeat, keeping a clean sheet in 18 of them.

“They are,” Hierro had warned, “a team that’s solid defensively, is very clear in its ideas; a hard team that let in few goals and has scored 37 in their last 19, 40 per cent of them from set plays. We will see a team that’s tough, physically very powerful and that will make it very difficult.”

Hierro had insisted that he would change as little as possible but given their opponents, there was a switch here. Koke was removed from midfield, Andrés Iniesta and David Silva playing alongside Sergio Busquets. That allowed greater creativity and swifter circulation in the middle; it also allowed for Lucas to be included up front, giving width and a willingness to run on the right. That, at least, was the theory. In practice, it was rather different.

To start with it appeared that Iran would look to step out, but they soon settled into what was often effectively a 6–3–1, the first two lines close, only Sardar Azmoun a little further forward. The game squeezed into a 20-metre strip that ran the width of the pitch, beginning near the edge of Iran’s area. Inside it Spain passed, heading from side to side, occasionally accelerating, usually led by Silva, whose best move saw him link with Iniesta, who was primed before the space before him was closed and the shot blocked.

Spain sought to break through those lines, but that was one of the few moments they did so. Lucas had been brought in for this, but the space he is adept at running into did not exist. Costa, too, was struggling, bouncing off defenders but not beyond them. Isco’s moments were fleeting.

Dani Carvajal sliced over early; that Silva shot hit the shoulder of Majid Hosseini; Sergio Ramos’s free kick went into the wall, and Silva hit another into the goalkeeper’s hands.

Iran stood firm. The few occasions they did look vulnerable came when they were caught coming away with the ball, which perhaps only increased the inclination to send it sailing into the wide open space before them, but did not see them desist entirely. Ramos then headed away Ramin Rezaeian’s cross from the right after a slick, swift move through the middle saw Iran open the pitch out to the right.

With every clearance there was a roar, insofar as any could be heard over the constant din of air-horns. This was an Iranian crowd, and a female one too, and it suffered when Silva’s deflected shot looped up and just wide.

Busquets was denied on the line and soon after the stadium erupted. Subs and staff leapt from Iran’s bench, thinking they had scored. Karim Ansarifard’s shot, though superbly struck, had flown into the side-netting. It had come from a long throw. And then, barely a minute after that, they were racing off the Spain bench instead. Iniesta found Costa and as he turned, Rezaeian sprinted towards him to clear, thumping the ball off Costa’s knee and into the net.

That, you suspected, was that. But Iran stepped forward and very soon there were people running from the bench again. This time it was all of them and they made it all the way down to the corner, celebrating what they thought was an equaliser when Saeid Ezatolahi put the ball past David de Gea as the ball dropped from a clipped free kick.

As they celebrated, though, the linesman’s flag went up and the referee stood in the area. Players circled him but he sent them away, trying to hear the message in his ear. It took a while, pause pressed on everyone’s emotions, but eventually Andrés Cunha disallowed the goal for offside.

Iran pushed Spain back. Gerard Piqué scrambled to get one over the line and at the other end Amiri was desperately close to a wonderful ball, sliding into the six-yard box. Amiri then brilliantly slipped the ball through Piqué’s legs and delivered a superb cross which Taremi, steaming in, headed over from six yards. - Guardian service