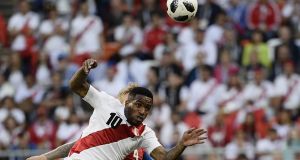 Peru forward Jefferson Farfan will not play in their final group match against Australia as he remains in hospital after being knocked out in training at the weekend.

Coach Ricardo Gareca admits the team suffered a scare when the Lokomotiv Moscow striker collided with a team-mate on Saturday, with the Peruvian Football Federation confirming he had sustained a “traumatic brain injury”.

Concussion protocols mean the 33-year-old will miss Peru’s last match on Tuesday before they fly home having already been eliminated after their first two fixtures.

“Farfan collided with a team-mate during a training session and we were very concerned,” Gareca said in his pre-match press conference.

“He was unconscious for a couple of minutes. The player received all the medical assistance required.

“He is okay but it was a scare. He is doing well.

“Unfortunately he cannot play tomorrow but the most important thing is he is recovering and will get well.

“There are some protocols in terms of recovery of a player so that means it is mandatory for a player to remain in hospital for 72 hours until he is stabilised.

“He could be released from hospital but we understand the healthcare of the the players is priority.

“We have to be very grateful for the immediate attention of the medical team and extremely grateful for Russia for being so well prepared for this kind of event.”

“It was a scare when it happened,” he said.

“He is a great loss for us tomorrow. We hope to have him back very soon because he is the spark of this team so we hope for a prompt recovery.”

1 Monica Seles: The warrior queen who could have been the best ever
2 Serpentine stays on from the front to steal Epsom Derby for Aidan O’Brien
3 Séamus Power huffs and puffs as Wolff blows the door down in Detroit
4 Eamon O’Shea: We spent quite a bit of time talking about older people rather than to them
5 Matt Williams: Six Nations must recognise the desire for revolution outside Europe
Real news has value SUBSCRIBE
Crossword Get access to over 6,000 interactive crosswords