Suarez and Cavani on target as Russians silenced 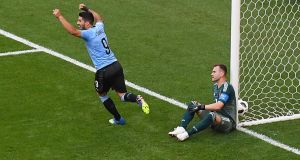 The opinion among Russia’s more phlegmatic observers is that, vibrant and positive as the early stages of this World Cup have been, it would be wise to extract every last ounce of fun from the party because reality will soon bite back. At some stage life will return to normal and the euphoria around the national team’s performance is one uplifting aspect that, on this evidence, may not last a great deal longer.

This defeat had no impact on the hosts’ progression from Group A but it was a reminder that, against practised opponents with a dash of quality, they will hit a ceiling on any normal day. Uruguay sailed past them with an efficient, unfussy display, aided by an early Luis Suárez free-kick and an own goal from Denys Cheryshev. By the time Edinson Cavani had sealed the issue the game had long since fizzled out and Russia, who lost Igor Smolnikov to a first-half red card, must now seek to make this a bump in the road rather than a juddering halt.

Samara considers itself to be one of the country’s more passionate football venues and there was certainly a more raucous, partisan atmosphere than local fans had produced in Moscow or St Petersburg. Russia had never played here before and, coupled with the dramatic swing in sentiment towards Stanislav Cherchesov’s side over the past 10 days, it made for something fresh: the boisterousness of a provincial city equipped to love its team.

Suárez’s goal was something of a buzzkill, then, and perhaps the most alarming aspect for Russia was that it came from the kind of error Saudi Arabia and Egypt showed little capacity to exploit. Uruguay were always going to present a step up in quality and it showed when the right winger Alexander Samedov played a careless pass backwards into his own half. Suárez was onto it smartly and the result, after his initial centre had been cut out, was a rash foul by Iury Gazinsky on Rodrigo Bentancur.

The position of the free-kick, 18 yards out and central, already looked like a gift for Suárez and when a bout of wrestling in the wall opened up an angle to Igor Akinfeev’s left his prospects increased further. He made no mistake, finishing low inside the post, and Russia’s momentum had hit its first sizeable hurdle.

They flickered in response, Cheryshev drawing an uncertain save from Fernando Muslera on the latter’s 100th international appearance and Artyom Dzyuba bouncing a header over. The attacking pair have been two of the foremost stars in a group stage of unexpected Russian success stories; it was in keeping with this game’s start, then, that its next unhappy accident befell one of them.

It was Cheryshev, unable to avoid being struck by Diego Laxalt’s left-footed shot, who diverted the ball past a scrambling Akinfeev to effectively kill the game. The effort, aimed back into a crowded box after a corner had been half-cleared, was going well wide; Cheryshev had already scored three goals at the right end in the previous two games but now had an own goal to his name.

This had all happened by the midway point in the first half. It almost got worse for Russia when Akinfeev saved at the feet of Bentancur but another reminder of their mortality would follow soon enough. Smolnikov, one of three newcomers to Cherchesov’s starting XI, had already been booked when, nine minutes before the break, he chopped down a full-flight Laxalt. There was nothing to question about Malang Diedhiou’s instant reach for the red card and on an oppressively hot evening you wondered whether in a perfect world everybody would have called things a day there.

For long periods nothing happened to sway anyone who held that view. Uruguay kept possession to moderately good effect and threatened a third when Cavani rolled Sergey Ignashevich, who recovered well to deny the chance. The home fans, unwilling to let the occasion slide completely, kept the noise up and would have had something to cheer about if a VAR referral had awarded Russia a penalty after Diego Godín caught Dzyuba with a stray arm. That particular physical tussle had, until then, been anticlimactic and the review offered Dzyuba nothing to show for it. The centre-forward had bullied and buccaneered to cult-like effect against Egypt before scoring a beautifully taken goal; here he looked very much a player whose calendar year has been spent in exile at Arsenal Tula.

Another striker, Cavani, was more constructively involved throughout but was frustrated that Suárez, who would have laid on an easy chance if his radar was functioning, overcooked his pass after another Russia mistake. Cavani looked like a player who needed a goal and duly got it at the death, snaffling up a rebound after Akinfeev had saved from Godín. Uruguay had hardly been at full tilt but then they tend to save their most pugnacious fare for the big guns. The question for Russia, though, is whether they have used up the last of their own strength.

1 Inside the world’s largest sports air dome just outside Knock
2 ‘Embarrassment, anger, sadness’: the decline of the great Stephen Hendry
3 Worst sporting moment: White knuckle ride on a hate-filled night at Windsor
4 As ever, Ronnie O’Sullivan sparks debate at the Crucible
5 Matt Williams: Players’ sacrifice must outweigh the rest of society
Real news has value SUBSCRIBE
Crossword Get access to over 6,000 interactive crosswords