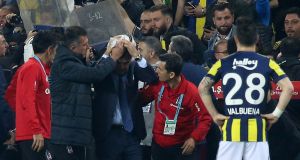 Besiktas manager Senol Gunes holds his head after being hit by a missile during a Turkish Cup semi-final against Fenerbahçe. Photograph: Stringer/AFP

An Istanbul derby is like no other experience in sport. Outside the stadium before kick-off there’s the smoke and smell of kofte meat burgers wafting through the air, the chanting fans and drum-beating musical groups whipping up a frenzy. Inside, in the hallowed tribune stands, the din and whistling can be deafening - fans at a 2011 Galatasaray-Fenerbahce tie were so wound up, the noise they made saw them entered in the Guinness Book of Records. Nothing else in football can quite compare to the febrility the derby evokes in fans.

This week Istanbul’s powerhouse clubs, Galatasaray and Fenerbahce, and little-known Basaksehir, are battling for supremacy in the closest championship run-in for years. With the final round of games being held this Sunday, three points separate the teams, with Galatasaray out in front.

Galatasaray and Fenerbahce may be familiar names but the past three years have seen Basaksehir, a club with reputed ties to Turkey’s governing AK Party, push hard to upend the status quo. Formed in 1990 in an outlying district of west Istanbul, Basaksehir finished fourth in 2016 and second last season, embarrassing Galatasaray with humbling 5-1 and 4-0 defeats along the way.

In many respects Basaksehir’s rise is illustrative of Turkish club football’s broader success. 18 state-of-the-art stadia have been built over the last decade, while this season Besiktas became the first Turkish team to go unbeaten in a Champions League group stage. According to KPMG’s 2017 European club evaluation report, “the most significant increase year-on-year (in Europe) is showcased by Turkey; thanks to increased revenues and significant improvements in terms of cost control and profitability.” When Fenerbahce beat Man United 2-1 in the Europa League last season, many in the stands that night felt Turkish teams could finally compete with the best in Europe.

The financial power of Turkey’s top clubs has seen them well-placed to attract world-class footballers in search of one last major payday before retirement. Robin Van Persie, Alvaro Negredo and Samuel Eto’o have or continue to ply their trade there. Emmanuel Adebayor has helped turn Basaksehir into a title contender and this season they have recruited players such as Gael Clichy, and Arda Turan on loan from Barcelona.

But club football’s enduring success is down to more than just star power. The three major Istanbul clubs, Besiktas, Galatasaray and Fenerbahce, are tied up in the fabric of everyday life through sailing, swimming and hugely successful basketball clubs, as well as family social events.

And yet, as progressive as Turkish football may appear, it’s been unable to shake off its unsavoury reputation.

Huge wage bills and the new stadia developments have left many clubs heavily in debt. Much of their ability to attract top names is down to tax breaks afforded to them by the country’s increasingly autocratic government. Clubs are also finding themselves squeezed between appeasing fans who air their anti-government views from the tribunes, and a politicised national football federation under pressure from the AK Party.

“There’s no doubt the politics plays a role in Turkish football,” says Erden Kosova, a founding member of Fenerbahce’s once-influential Vamos Bien ultras group. “The head of the (football) federation (Yildirim Demiroren) is a businessman who also ventured into media business and recently became the strongest media boss in the field. This is engineered by the government - financially and administratively - in order to neutralise the mainstream press and broadcast channels.”

Experts agree. “The separation of politics and sports is, by definition, a fiction.” says James Dorsey, author of The Turbulent World of Middle East Soccer. “Certainly, Turkish politics and sport were always intertwined, but more so under (president Recep Tayyip) Erdogan, and that became ever stronger since the failed coup (in July 2016). You have an increasingly authoritarian regime that’s seeking almost absolute control - and that includes football.”

The pervading spectre of hooliganism was plain to see in the abandonment of a cup semi-final between Besiktas and Fenerbahce last month, after the former’s coach suffered a head injury when hit by an object thrown from the crowd. My own introduction to Turkish football in 2010 involved a short-lived game between Diyarbakirspor and Bursaspor that was abandoned after players and officials were hit by lighters and bottles. Soon rows of seats were set alight and riot police backed by fire engines were called in.

Nor are players completely blameless; much of the onfield action emanates from drama other than the football itself. This month, Turan, the most divisive figure in Turkish football, was banned for 16 games for pushing and threatening a referee’s assistant. Five players were sent off when Besiktas and Fenerbahce met in a league game last September while Paul Pogba’s brother, Florentin, made headlines last week when, with his Ankara-based Genclerbirligi team 1-0 down and facing relegation, he walked off the field with an injury. Pogba immediately found himself violently confronted by his own teammates.

Turkish football is replete with long-running dramas: Fatih Terim, the godfather of club and national team set-ups, resigned as Turkey manager last summer when he and his sons-in-law were involved in a fight - with a restaurant owner. By December, however, Terim was installed as Galatasaray manager, for the fourth time, and this weekend may very well lead the club to a 21st league title.

Despite and perhaps because of its troubles, appetite for the game around the country remains strong. More than 28,000 people attended a third division play-off earlier this month held in Adapazari, in northwest Turkey, showing that interest in club football is as strong in Turkey’s rural regions as in its major cities. Clubs often cover the cost of transporting supporters to away games that, when involving a 30-hour round-trip bus journey, double as a weekend holiday.

Monday evening saw the race for the Super Lig title constrict further when Fenerbahce won their penultimate game 7-0, drawing them level on goal difference and three points behind leaders Galatasaray. Who will prevail on Sunday is anyone’s guess, but in a season where the champions of Europe’s major leagues were decided with weeks to spare, there’s something refreshing about watching Turkey’s theatrical, chaotic championship going down to the wire.

1 Ireland v Scotland: Doris’ day as Caelan set for first cap
2 Six Nations: Pundits, journalists and players have their say
3 Kobe Bryant obituary: A transcendent, if enigmatic, superstar
4 Gary Lineker: ‘60 is just a number, 70 is the one to worry about’
5 Niall Quinn and Gary Owens reassure FAI staff about future
Real news has value SUBSCRIBE
Crossword Get access to over 6,000 interactive crosswords