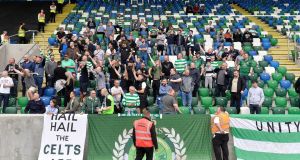 Celtic fans have been fined for their banners at Windsor Park, Belfast earlier this month. Photograph: Inpho

Celtic have been fined just over €23,000 by Uefa for crowd offences in their home Champions League qualifier against Linfield.

Uefa said the first charge related to a banner portraying a person in a paramilitary uniform.

Meanwhile, Craig Gordon remains confident that Celtic can get themselves out of an awkward Champions League spot against Rosenborg in Norway next week.

The Hoops drew a blank in the first leg of the third qualifier at Parkhead on Wednesday night, with the Scotland keeper making several good saves against the neat and tidy Eliteserie leaders.

The Scottish champions face a precarious return game in Trondheim next Wednesday but, ahead of a friendly at Sunderland on Saturday, the former Black Cats keeper said: “It could have been worse. We could have been going there behind but we are still very much in it.

“It wasn’t a terrible result to get at home, the clean sheet was really important. We are satisfied with it.

“If we get the away goal over there we are in the driving seat.

“We didn’t manage to get a goal but we are still in a decent position. I’m sure that we have enough in the dressing room to come through the game.

“Rosenborg will be quietly confident that they can get the win. It is going to be a close game but we are confident in our abilities to go away from home and win the match.”