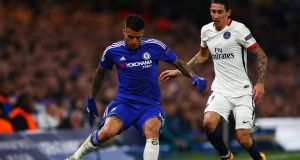 Chelsea’s Kenedy has apologised for comments made on Instagram. Photograph: Clive Rose/Getty Images

Brazilian defender Kenedy was booed by Chinese fans during Chelsea’s 3-0 victory over Arsenal in a pre-season friendly in the Bird’s Nest in Beijing after posting racist insults on social media.

The 21-year-old had fans and officialdom fuming after he wrote “Porra China” (F**k China) and posted a photograph of a snoozing security guard captioned “Wake up China idiot” on his Instagram account.

The posts were quickly deleted but so great was the outrage that even the ruling Communist Party’s official organ, the People’s Daily, weighed in with some sharp criticism of Kenedy and barbed comments about racism in the Premier League.

“It is without rhyme or reason that Kenedy made such insulting and venomous remarks about China. There were no grounds whatsoever for him insulting his hosts. Chinese people always warmly welcome any foreign sportsmen and women,” the People’s Daily said.

“An ever-stronger China has become more tolerant of foreign criticisms. But it will by no means tolerate such insulting opinions,” it said.

Kenedy joined Chelsea from Fluminense in 2015 and made three appearances on loan at Watford last season.

China is becoming increasingly important to English clubs and competition is fierce as they try to gain a following in an enormous and potentially hugely lucrative, market. Both Chelsea and the player issued fulsome apologies.

“Everyone at Chelsea Football Club has the utmost respect and admiration for China and loves our Chinese fans . . . Once again, we sincerely apologise for the hurt caused to our Chinese fans as well as to the Chinese people,” the Blues said in a statement, adding that Kenedy had been reprimanded and punished.

Kenedy wrote: “Hello my friends, just wanna say sorry if someone was sad because I used the expression ‘porra’ was not racism, just a expression . . . big hug.”

People’s Daily said it was not the first example of racism from the Premier League, and said English clubs needed to manage their players better and demonstrate “zero tolerance toward such derogative words”.

After a comfortable win over Arsenal, which included a fine brace from Michy Batshuayi, Kenedy and Chelsea have moved onto Singapore for the next leg of their tour. They will be without Pedro, who will miss rest of Chelsea’s pre-season tour after suffering concussion in a clash with Arsenal goalkeeper David Ospina.

In a busy weekend of sport in China, Jim McGuinness continued his winning ways with Beijing Guoan after they won 2-1 away to fierce rivals Shanghai Shenhua, giving the former Donegal manager his third win in the Chinese Super League since he joined coach Roger Schmidt as assistant.

Catalan striker Jonathan Soriano, who is enjoying a great run of form under Schmidt and McGuinness, scored twice to help the visitors take all three points at the Hongkou stadium in Shanghai.

Soriano secured all three points with a penalty in the 47th minute.