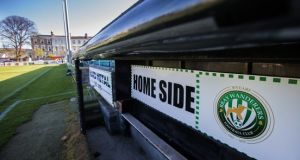 After several weeks of uncertainty, Bray Wanderers chairman Gerry Mulvey has issued a statement insisting the club is now financially stable “for the foreseeable future,” and intent on pursuing an ambitious development plan that includes the redevelopment of the Carlisle Grounds - with the proceeds going towards the a new home and “a world class football academy to rival the best in the world”.

Members of Wicklow County Council have generally responded negatively to the idea of re-zoning the club’s current home when it was previously floated by Wanderers officials, with individual councillors suggesting to The Irish Times that in the event the club wants to move it would simply have to surrender its sporting lease on the facility.

If that happened the council would have the option of awarding a new lease to another sporting organisation or embarking on a redevelopment itself from which it would benefit from any financial windfall.

In his statement, which is unlikely to provide all that much by way of reassurance to anyone given its rather bizarre tone, Mulvey seems to acknowledge this ongoing resistance to his plans by the authorities and describes Wicklow as having “now attained the accolade of being the North Korea of Ireland for business.”

He repeats the suggestion that Wanderers are operating in “North Korea,” but says that “like all suppressed people, they eventually revolt, a revolution of Football is going to start and Bray Wanderers will be the leaders not just for Wicklow but for Ireland in this revolt.”

Mulvey says that he is determined the club will proceed with his plan to purchase a new ground, and to build what he claims will be the best academy in Ireland, with those at the likes of Manchester United and Barcelona cited as models for what is envisaged.

He says that preliminary talks on the purchase of a site have already started and that the club will, in due course, seek the re-zoning of the Carlisle Grounds.

Mulvey, who recently assumed the role of chairman at the club, acknowledges that there will be “naysayers” but responds to them with a quote from the motivational author, Ernest Agyemang Yeboah: ‘One great enemy we must all endeavour to fear not conquering is fear. Fear can cripple purpose and purposeful life. Fear asks question we must fear. Fear makes vision a nightmare.

“Those afraid and living in fear,” the statement concludes, “rest assured fear has no place in Bray Wanderers.”

1 Born to ride, born to win: Sam Bennett, the making of a green machine
2 Leinster look ready to step things up and burn off Saracens challenge
3 Keith Duggan: Surreal story of John Delaney needs to act as a wake-up call for FAI
4 Will 'Porridge' Connors now delivering on his massive potential
5 Michael Walker: Gareth Bale’s place in Real’s history a strange type of glory
Real news has value SUBSCRIBE