FAI insist that rocky times are over - no questions about it 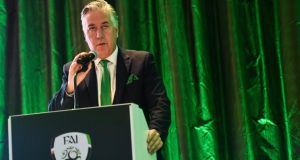 Questions to the top table were once again off the agenda at Saturday’s Football Association of Ireland annual general meeting in Kilkenny but according to the hierarchy all is well within the football family.

The association still may be €39 million in debt arising from their misguided premium ticket sales scheme, the League of Ireland licensing system continually under scrutiny and the Republic of Ireland women’s squad only receiving tracksuits of their own in April after the threatening strike action, yet the 122 delegates in attendance were implored to look on the bright side.

Not that the latter two issues were raised. Their debt position consumed plenty of time during the two hours and 20 minutes of monologue, with treasurer Eddie Murray, financial controller Eamon Breen and chief executive John Delaney all insistent the rocky times were over.

Those declarations are of scant consolation to the association’s development officers, much-lauded yet under-paid, who have been repaid just a fraction of the wage cuts that were sought and implemented as the debts soared in 2012.

Whether the FAI succeeds in having their borrowings cleared by 2020 remains to be seen. That was the promise made in the early part of the decade, only to be revised following a debt write-down of €11 million in 2013. The stance was then altered, contending they had the ability to do so but may opt to retain some loans in order to invest in areas of need in the game.

It is becoming increasingly clear the outcome of the current World Cup qualification campaign will frame the debt plans. Were Martin O’Neill’s side, currently co-leaders with Serbia in Group D, to clinch their passage to Russia next year, they’d bank the FAI approximately €11 million in prize-money from Fifa.

“While we do not forecast qualification for major tournaments, should this happen in 2017, the financial impact would be significant and go a long way towards deciding the future financial strategies,” said Murray.

Joining the FAI’s board of directors today was Niamh O’Donoghue, chairperson of the Women’s FAI. Her election expands the board number to 11.

The absence of “any other business” on today’s agenda killed any remote prospect of a brave delegate having the temerity to pose a question. Delaney hasn’t taken questions from the media at AGMs since their finances began to plummet in 2012.

Despite stating to assembled press at a briefing in May that he’d “probably” address media queries again during the week of this AGM, his communications team confirmed that he had refused. A request to discuss topical issues with the president Tony Fitzgerald, who unlike Delaney is elected and not selected, was also declined.

1 Born to ride, born to win: Sam Bennett, the making of a green machine
2 Leinster look ready to step things up and burn off Saracens challenge
3 Keith Duggan: Surreal story of John Delaney needs to act as a wake-up call for FAI
4 Connors now delivering on his massive potential
5 Let’s face it, Saracens don’t really care that they are rugby’s most hated team
Real news has value SUBSCRIBE
Crossword Get access to over 6,000 interactive crosswords