Irish emigrants down under looking to turn over Sydney FC giants

Set up as a sister club to Shamrock Rovers, Darwin Rovers have made a meteoric rise 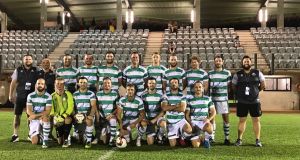 Darwin Rovers after training ahead of their FFA Cup clash with Sydney. Back left are founders Shane Kavanagh and Jimmy Culligan.

Imagine this: a group of Irish emigrants in Australia set up an amateur football club, train a couple of nights a week, win the league title in their first season and, within three years, are preparing to face the biggest club in the country who boast such names as Dwight Yorke, Juninho and Alessandro Del Piero among their former players.

Not at all. In the Northern Territory of Australia, perched on the Beagle Gulf, lies the city of Darwin – home to about 5,000 Irish people in a total population of just over 100,000. Within that strong Irish community in a highly multicultural city is Darwin Rovers FC – formerly known as Shamrock Rovers Darwin.

Set up in 2014 by Jimmy Culligan and Shane Kavanagh as a sister club to Shamrock Rovers, the team was originally made up almost entirely of Irish emigrants and was as much invested in the social scene of local pubs as the training ground. To be fair, with year round heat of over 30 degrees in the dry season – during which the football campaign takes place – and stifling humidity in the wet season, adequate refreshment is needed after training and matches.

With the Tallaght club’s logo on their crest and playing in the green and white hoops, they didn’t take long to taste success when they won the third tier of Darwin men’s senior football in their very first season in existence and suffered a narrow loss in the cup final.

From there the rise has been meteoric with direct promotion to the Premier Division the following season followed by the setting up of a second team in the Reserve Premier League. In their first season in the top flight they finished third with the second team matching that finish in the reserve league. However, it was their Northern Territory FFA Cup win which propelled them onto the national stage.

By winning the tournament in their region they reached the last 32 of the national competition to be drawn against Brisbane Strikers of the National Premier League – one division below the A-League.

This year they’ve gone one step higher. In fact they have gone right to the top. On Wednesday August 2nd the amateur club from Darwin will welcome three-times and defending A-League champions Sydney FC to Larrakia Park in front of a sell-out 3,000-strong crowd.

The two clubs could not be much further apart – both figuratively and literally. Sydney sits 4,000km from the home of Darwin Rovers, requiring a flight of over four hours for the side who, in their last two matches, welcomed Liverpool and Arsenal to the ANZ Stadium for pre-season friendlies in front of 45,000 people.


And the figures just keep coming. While Darwin Rovers – who were forced last year to remove Shamrock Rovers from their name and the shamrock from their crest due to regulations prohibiting clubs from being linked to a country – cobbled together AUS$8,000 (€5,430) of sponsorship just to keep the club going last season, Sydney shelled out AUS$3.5 million (€2.375 million) in players’ wages to a myriad of international players including star striker Bobo – a Brazlian who is still the record club goalscorer for Besiktas and once upon a time netted against Liverpool in the Champions League.

A plumber by trade and hailing from Sandyford in Dublin, Culligan moved to Australia in 2010 and four years later set up the club along with fellow emigrant Shane Kavanagh.

Now, three years later Culligan estimates that his side will benefit to the tune of about AUS$10,000 (€6,800) from the game with 40 per cent of the gate receipts coming their way as well as exposure through a live stream broadcast on Fox Sports Australia.

It’s the biggest game in the lives of a squad made up mainly of Irish and English with a sprinkling of Africans, a Colombian and a few Scottish. Speaking while overseeing training in Darwin, Culligan says that “it would be right up there with the biggest shocks in the history of football around the world if we pulled it off.

“To put it this way: they’re [the FFA] giving us AUS$2,500 if we just score a goal against them. It’s a bonus they give the regional teams against the big teams.

“It’s been just an astronomical rise. It’s happened so quickly. When we started out I just thought it was a group of Irish lads who’d go down to the pub together and not much more than that. We’ve been really lucky with the standard of footballers we have as well. There’s a lot of lads here that probably could have made it had they not got sidetracked when they got a bit older,” Culligan says.

While football isn’t the most popular of sports in Australia, with Aussie Rules and Rugby League particularly big in the Darwin area – as well as cricket nationwide – the arrival over the years of players such as Yorke, Del Piero and even Damien Duff during his spell at Melbourne Victory, has helped to raise the profile.

The large population of immigrants from around the world has also had an effect with Ireland not the only foreign country represented, even so much as in their own league. Two of the giants of Darwin football – Hellenic and Darwin Olympic – are of Greek origin and have become mainstays in the region’s top division since being founded in 1958 and 1967.

Indeed it was Hellenic – 56 years the senior of Darwin Rovers – who Culligan and his team beat 1-0 in the FFA Cup semi-final back in May, just days after losing 6-1 to the Greeks in the league. What made the result even sweeter was that it came just months after the older club had lured two of Rovers’ best players away with the advantage of being somewhat semi-professional and paying their players a wage.

While Hellenic have the league title virtually wrapped up thanks to a 13 point lead after 13 games, Culligan says his team are still confident of catching Olympic in second place.

However, the focus for this group of emigrants is very much taking on the stars of Sydney. Culligan says that the money made from the match will enable them to set up a junior section and cover the costs of physios, trainers and an official team doctor they have recently had to take on, with the growth of the club showing no signs of stopping.

So then, what are the realistic expectations for the meeting with the giants from New South Wales?

“Last year when we played for the first time against a professional side in Brisbane Strikers, we were beaten 6-0 and I came off the pitch really disappointed. We were a bit shell-shocked and nervous with the cameras and a few thousand people watching. Really, if I came away thinking that we put in a great performance and everyone played their heart out and could come off holding their head high, that’s all that really matters to me.”

The odds are heavily stacked against them but, over 14,000km from home, a group of Irish emigrants have the chance to shock the world.

Tiger Roll to return on the flat at Navan on Thursday 08:22
Exeter’s Rob Baxter: Covid-19 poses threat to rugby’s viability 08:18
Waterford pull out of Antrim clash due to Covid-19 concerns 08:43
Golf courses to close under Level 5; Andy Farrell names team for Italy clash 07:52
Connacht coping with Covid case and injuries ahead of trip to Edinburgh 07:00