Neymar storms out of Barcelona training after bust-up 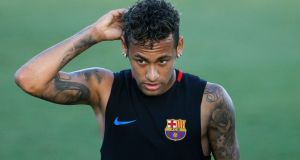 Neymar was involved a training ground fight with a Barcelona team-mate as his as his world record transfer to Paris Saint-Germain appears to edge closer.

The Brazilian clashed with new Barça signing Nélson Semedo during a training session in Miami before the pair had to be kept apart by team-mates Javier Mascherano and Sergio Busquets. Video footage shows Neymar removing his bib before storming off.

PSG remain confident of signing the 25-year-old having held talks with Barcelona officials last week over the structure of the €222m fee. In an interview with the New York Times published on Thursday, Barcelona president Josep Bartomeu admitted that he is powerless to stop him.

“Neymar is one of our best players, and so we don’t want to lose that player,” he said. “We want him to continue with us. He still has four years of his contract, so there is nothing else to say.

“You know that players decide if they want to leave, they can decide. But as far as Barcelona, we want him, and we need him. Because if we want to win, we need the best players possible.”

Speculation is growing that he could complete his move in the next week after it emerged Neymar will not accompany the rest of the Barça squad on their flight back from the United States after Saturday’s friendly against Real Madrid and will instead head to China to fulfil commercial commitments. It has also been reported that a scheduled promotional event for travel agency Ctrip in Shanghai has been cancelled, with the company explaining that “the player and his staff are involved in a transfer”.

Meanwhile, Dani Alves has denied suggestions that he has been attempting to help PSG woo his international team-mate. “Lies,” wrote the 34-year-old in response to a tweet from Spanish radio station Onda Cero. “I am not trying to convince anybody of anything. When I speak with him, we talk about everything but football. If he is happy, I am happy.”