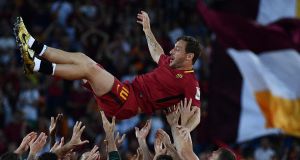 Roma’s Francesco Totti during a ceremony following his last match with AS Roma in May. Photograph: Vincenzo Pinto/AFP/Getty Images

Francesco Totti has confirmed his retirement as a player by accepting a directorship role with Roma.

The 40-year-old Roman, who represented the Giallorossi for 24 years as a striker, played his last game for the Serie A club in May but his status since had been uncertain as he fielded offers.

In an interview published on Roma’s official website on Monday evening, Totti admitted his illustrious on-pitch career was a thing of the past and that a new life in football management awaited him.

“I’ll carry it with me forever. It will be hard to explain to people the feelings and emotions I felt that day.

“The first part of my life, as a player, has ended but now I’m heading into an equally important part as a manager, hoping to do as well as I did on the field.”

He was reportedly close to making a swansong switch to China or Major League Soccer but has instead hung up his boots.

“I never wanted that game to end, that day to end,” said Totti, who is Roma’s all-time leading goalscorer with 307 in all competitions.

“For me it was too important, too significant, too exciting.

“The game has given me so much and I tried to give so much back to the people who have showed me so much love day after day.

“Now I’ll try to make myself available at all 360 degrees, from the youth team to the president. It might take six months, a year, two years... I don’t know how long it will take to find the role I prefer.”

1 Trump endorsement by Jack Nicklaus leads to avalanche of dismay
2 Ireland fall short against France as England win Six Nations title
3 World Handicap System: What is it? How does it work? Will my handicap change?
4 Jota forgets penalty miss to steer Liverpool past West Ham
5 Galway expose Wexford’s lack of Plan B to reach Leinster final
Real news has value SUBSCRIBE
Crossword Get access to over 6,000 interactive crosswords