Predictable FAI agm but no standing ovation for Delaney

Sales of season tickets on course to reach the 15,000 mark this year, meeting hears 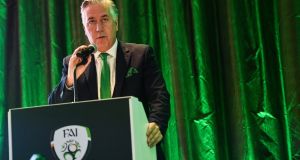 The journey from the conference room in the basement of the Hotel Kilkenny to the main banqueting hall, up two flights of stairs, should take no more than 30 seconds but the FAI were in no mood to embrace common courtesies at Saturday’s annual general meeting.

Paranoia at the potential interaction between the media and what they commonly refer to as the football family has been at the root of the FAI’s separation tactics at the yearly summit for the last five years and this operation was the most extreme.

Rather than being allowed take the beaten track, the five journalists on duty were instead escorted by security personnel up one floor, across reception past a bemused group of hen party guests checking in, through the restaurant, ascending the fire-proof emergency staircase and into the back of the room. “You’re holding up the meeting,” smirked one senior FAI official keeping the special entrance ajar.

What followed over 2½ hours was along predictable lines, only for the first time in three years chief executive John Delaney wasn’t granted his usual standing ovation.

Delaney reiterated that debatable issues continue to be discussed away from the public glare, backed up by the staging of a third emergency general meeting in seven months immediately after Saturday’s initial procession.

That gathering to introduce an additional transfer window during August for players between Under-12 and Under-15, prompted by concerns of the Dublin and District Schoolboys’ League (DDSL), lasted just eight minutes.

Similar in duration was the delivery at the agm from Noel Mooney, the former League of Ireland marketing manager who departed for a plum Uefa post in 2012.

His speech amounted to a glorified sermon on all that is good about his former employers, noting the shining beacon they’ve become in the eyes of Uefa, with the superlatives rarely deviating from “phenomenal” and “super”.

During his time with the FAI, of course, the marketing guru was also known for his gift of the gab, memorably forecasting in 2007 how within five years League of Ireland weekly attendances would rocket to 30,000. According to figures compiled by extratime.ie, the average weekly turnout this season up to last month’s break across the 10 fixtures sat at 17,000.

Mooney’s aspirations were well-intentioned but predicated on the FAI maintaining a €500,000 annual budget allocated to promote the domestic product. In tandem with the prize-pot they trumpeted at that stage to validate the merger with the league, investment in national advertising campaigns was serrated.

Gone too was the €15,000 subsidy for employing a Club Promotion Officers and it took five years for the association to fund a replacement for Mooney by recruiting from within.

Requests to ascertain the budget afforded to newly-appointed John McGuinness have not been forthcoming from the FAI but the lack of television and radio advertisements flagging the weekly series of fixtures tells its own story.

Carefully selected figures were announced throughout Saturday’s summit, with others distinctly absent. Sales of season tickets, according to veteran treasurer Eddie Murray and financial controller Eamon Breen, were on course to reach the 15,000 mark.

Based on the average price, that would gross the FAI €2 million, yet specifics on the more lucrative premium ticket and corporate box market were non-existent.

Observing the swathes of empty corporate boxes in the south stand of Lansdowne Road at last month’s World Cup qualifier against Austria suggests there’s plenty of work to do in bringing the commercial sector on board.

It was, lest we forget, the strategy of targeting “high net worth” individuals which triggered the FAI’s financial problems.

Following weak uptake of the 10-year Vantage Club scheme, the cost of servicing a €63 million mortgage on the Lansdowne Road project affected all strands of the game, not just the League of Ireland, and it will take many years for the damage caused to be repaired.

Joining the FAI’s board of directors on Saturday was Niamh O’Donoghue, chairperson of the Women’s FAI. Her election expands the board number to 11.

Discontent within the association’s rank and file remains rife, evidenced by the increase over recent years of union membership among their technical staff.

Breen attributed an element in the rise of costs during 2016 by €7 million to €29 million to a 3 per cent pay increase. This, however, was merely a marginal replenishment of the wages lost by the staff, including 52 development officers, as the mistakes of the hierarchy began to bite all around them.

Siptu are prepared to escalate their case for full restoration to a Labour Court hearing but Delaney has once again called upon experienced negotiator Peter McLoone to try broker peace. All eyes now turn to August 9th when the man who helped prevent the Republic of Ireland women’s team from boycotting an international match in April is tasked with dodging another uprising.

If the FAI’s financial position is improved to the extent they declare, there should be no defence to not spending another €1 million in pacifying loyal staff. Then, it might be just the media they’ve to be fearful of.