Testing time for Tottenham as they face must-win against PSV

After shaky start to season, Pochettino's side are in their stride for Champions League 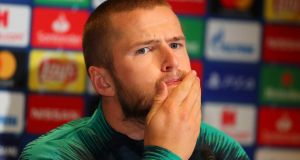 Eric Dier: “There’s been a lot of obstacles to overcome at the beginning of the season, we’ve done that and the squad is stronger for it.” Photograph: Catherine Ivill/Getty Images

Put yourself in Eric Dier’s shoes. The Tottenham midfielder reported for pre-season training on August 6th, after a three-week, post-World Cup holiday, and he was straight into the line-up for his club’s Premier League opener at Newcastle five days later. He has since sat out only two fixtures for Spurs and England.

Like each of his team-mates, Dier was looking forward to entering the rebuilt White Hart Lane, but that has not happened because of the various delays, and it will not happen until December at the earliest. Spurs have continued at Wembley, in what has felt like a month-to-month limbo, with the added curveball of having to play a Carabao Cup tie in Milton Keynes. Not ideal.

Dier’s lack of a pre-season was a similar story to that of eight of his colleagues – each of whom played until the final weekend of the World Cup – but, at least, he has not gone down with a muscular injury, as five of them have done. The number is six if Christian Eriksen is included; he exited the World Cup at the last 16.

The season for Tottenham so far has seen Mauricio Pochettino question the team’s mentality following the Hugo Lloris drink-driving conviction and the loss of Son Heung-min to the Asia Games while, in the background, the issue of the lack of summer signings has lurked. Whenever the team loses, that one gathers momentum.

In short, it has been a testing time, and Pochettino has made it plain that he considers this to be his toughest season at the club.

“When I signed my new contract [at the end of May], I expected a tough period but it’s tougher than we believed,” he said.

Yet in adversity, something has stirred. When Spurs lost three on the spin to Watford and Liverpool in the Premier League and Internazionale in the Champions League, they were in crisis.

Since then, they have won four in a row in the league to make this their most productive start to a Premier League campaign. They have also progressed in the Carabao Cup.

The problem in the Champions League was a second Group B defeat in two – at home to Barcelona – and it has left them staring at a must-win tie at PSV Eindhoven on Wednesday. PSV, the runaway Eredivisie leaders (P9 W9 GD +33), are also on zero points in the group. Tottenham have closed ranks, adopting the mentality of a siege, and Dier believes it will serve them well in a defining test of their European ambitions.

“There’s been a lot of obstacles to overcome at the beginning of the season, we’ve done that and the squad is stronger for it,” Dier said. “It’s not easy and everyone is human. But considering the circumstances, we’ve done as best as we can. You can either let these things knock you or you can use them as something to push you forward. That’s what we’ve done.”

Dier says that a compressed pre-season programme has become a way of life for international players, although he accepts that this year was an “extreme version” of it.

“It’s a strange feeling,” Dier said, when asked what it was like not to have a proper pre-season. “But it’s something we’re all used to now. Every summer there are international fixtures. For the last three or four years, a big majority of the group haven’t come back for the first day of pre-season. It takes a bit of time to get going if you’ve been on holiday for three weeks, but I’ve felt very good physically from the beginning of the season.”

Pochettino has started to make his feelings more explicit about the stadium delays and he had another dart here.

“It’s difficult to play always with that feeling that you’re away from home,” he said. “We are managing a lot of things. I’m sure someone will benefit from our patience, our work.”

Dier had a more upbeat reading. “The stadium is going to be fantastic for Tottenham for the next 100 years,” he said. “People shouldn’t focus on if it’s going to be done in November, December. People need to look at the bigger picture.”

The situation for Tottenham in the Champions League is more stark. “We have our backs up against the wall,” Dier said. “We have to win every game. That’s the mentality now.”