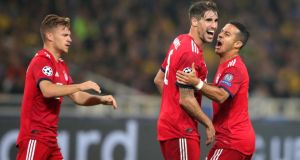 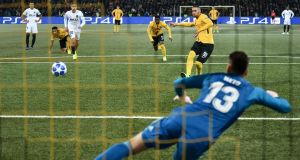 Bayern Munich scored twice in two minutes to beat hosts AEK Athens on Tuesday to continue their recovery from a recent dip in form and climb to the top of their Champions League Group E.

Javi Martinez volleyed in after 61 minutes and Robert Lewandowski tapped in their second goal two minutes later for their second win in three group matches.

The result gave the Bavarians a further shot of confidence after Saturday’s league win at VfL Wolfsburg ended a four-game winless run in all competitions, and silenced any talk of a crisis.

The Greek champions did well for about an hour but ultimately could not match Bayern’s speed and power.

Bayern were in control of an entertaining first half, with Serge Gnabry and forward Lewandowski coming close several times.

AEK, who have yet to earn a point after three matches, carved out a couple of scoring chances as they caught the Bavarians off guard, with Ezequiel Ponce thundering a powerful shot narrowly wide.

The hosts piled on further pressure after the break, pressing high and coming close with Viktor Klonaridis before Martinez’ acrobatic volley silenced the crowd at the Olympic Stadium.

Bayern, who have never lost to a Greek club, home or away, quickly killed off the game two minutes later, with Lewandowski left with too much space in front of goal to slot it a Rafinha cutback.

Bayern are on seven points from three games, with Ajax Amsterdam, who take on Benfica later on Tuesday, on four. Benfica are on three.

Champions League debutants Young Boys scored their first goal and picked up their first ever point in the competition with a deserved 1-1 draw at home to Valencia.

Michy Batshuayi gave Valencia a first-half lead – their first goal in Group H – but Guillaume Hoarau equalised with a penalty after the break.

Young Boys goalkeeper Marco Woelfli finally made his Champions League debut at the age of 36 having spent all but one season of his career at the club.

Batshuayi was caught offside a couple of times early on but made no mistake in the 26th minute.

Loris Benito hit his clearance straight against Carlos Soler who flicked the ball through to the Belgian and he rounded Woelfli to put Valencia in front.

Valencia goalkeeper Neto saved a Christian Fassnacht header and Kevin Mbabu fired wide of the post after a loose ball ran free to him as Young Boys came back strongly after the break.

The Swiss champions finally scored in the 55th minute when Djibril Sow was tripped by Daniel Parejo and Hoarau calmly converted the penalty to make a small piece of Champions League history.

Sekou Sanogo came agonisingly close to giving Young Boys a memorable late win when he headed against the inside of the post from a corner.