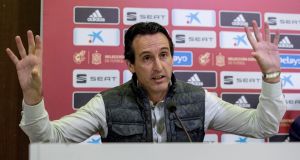 Arsenal’s head coach Unai Emery: “we need to get better in a lot of things now”. Photograph: EPA/Rodrigo Jimenez

Unai Emery and his Arsenal players are urging supporters not to get carried away with their recent run of form. The Gunners can notch up a 10th straight win with Premier League victory over Leicester on Monday night.

Since defeat to Manchester City and Chelsea in the opening two games of the season, Emery has lead his new side to wins in every game. Arsenal can move two points off the top of the table if they see off the Foxes at the Emirates Stadium, but Emery wants to keep things in perspective.

“Manchester City and Chelsea were the first two games,” he said. “They are two teams in form and with two points more than us. Their qualities and performances are very, very high. But also we are doing our way and we are improving our things.

“We need to carry on to find our best individual and collective performance to stay close to them. But I say to you: we need to get better in a lot of things now. It is our best target now, don’t stop. Think and analyse with the players to improve this.”

Full-back Hector Bellerin echoed the sentiments of his manager, and believes the players are still able to improve under their new head coach.

“We need to be realistic. Rome wasn’t built in a day,” he told Arsenal’s official website. “There’s loads of things that are changing for us, not just as a team but as a football club, so the most important thing is to believe in the way that we want to play.

“We’re a team now that play from the back. We probably risk it a bit more than before, but for us it is important for our fans and for everyone around us to believe in this idea that we have.

“At the beginning it is going to be harder, but the more we train it, the more we work at it, the better we are going to get at it. For us it is about getting used to the system, be a team, be competitive and have this winning mentality, take it to the next level and become the team that the manager has in mind.”

Emery is expected to recall Mesut Özil against Leicester after he missed the 5-1 win at Fulham due to a back spasm. Danny Welbeck is also in contention to retain his place despite the fact he missed England’s two Nations League games with a hamstring problem.

Meanwhile, Leicester have secured the future of a second England defender by handing Ben Chilwell a new long-term deal. A month after agreeing fresh terms with Harry Maguire, Leicester have locked up 21-year-old left-back Chilwell, who has come through the ranks at the King Power Stadium.

Chilwell made his England debut last month, and his first starts followed in last week’s goalless Nations League draw with Croatia and the 3-2 win in Spain.

Chilwell joined Leicester’s academy aged 12, and said he was excited to extend his association with the Leicester until June 2024.

“Leicester’s always felt like the right place for me,” he said. “I’ve had fantastic support at every level since I arrived nine years ago, and I’ve always felt opportunities would come if I continued to work hard. That’s a great feeling to have as a young player.

“The club has really big, long-term plans, and it’s really exciting to know that I’m going to be part of that. We’ve got a great squad with quite a youthful core so there’s a real opportunity for us to push on and achieve something together in the coming years.”

Chilwell spent a large part of Leicester’s famous title-winning season of 2015/16 on loan at Huddersfield, but after making his Premier League debut the following campaign he has nailed down the left-back position as his own.

Leicester boss Claude Puel praised Chilwell’s progress, and said he can be a role model for youngsters in the club’s academy.

“It’s great news for the club,” Puel said of the new deal. “Ben is an exciting young player with huge potential who is already learning and improving by playing regular Premier League football.

“If he continues to work hard he will become a valuable player for us and I hope for the England team. He is already an example for the young players of our Academy, highlights the excellent work within it, and validates the project of the club.”

Chilwell has played every minute so far of Leicester’s 2018/19 Premier League campaign.