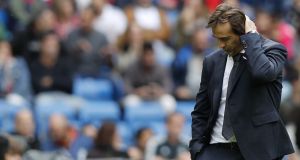 Real Madrid coach Julen Lopetegui’s woes deepened as the European champions fell to a 2-1 defeat at home to Levante on Saturday, setting an unwanted record of 482 minutes without scoring a goal in the process.

Jose Luis Morales put Levante ahead in the seventh minute after a defensive slip from Raphael Varane while Roger Marti doubled the lead in the 13th from the penalty spot after a handball by Varane, with the spot-kick awarded after consultation with the video assistant referee (VAR).

Real created a number of chances down the other end but hit the woodwork three times and had a strike by Marco Asensio ruled out by VAR for offside and early in the second half they broke an unwanted club record of 464 minutes without scoring.

Marcelo finally snapped their long spell without a goal by smashing into the net midway through the second half, scoring the club’s first goal in 482 minutes.

But despite creating a glut of further chances Real slumped to a third straight loss in all competitions to pile the pressure on under-fire Lopetegui.

“We are feeling very bad, we 100 percent had to win this game and we kept trying until the end but it wasn’t meant to be,” said Real midfielder Dani Ceballos, who also gave his backing to Lopetegui.

“I believe in the coach, although the decision isn’t mine. I don’t think his job is in danger, we are right behind him.”

Real, who were booed by their fans, are fifth in the La Liga standings, three points behind leaders Alaves.

Real were in dire need of a win after losing to CSKA Moscow and Alaves in their last two games and they were boosted by the return of influential figures Isco and Marcelo although Gareth Bale could only start on the bench after recovering from injury.

Madrid conceded the first goal for the seventh time in 11 games in all competitions when Varane failed to clear the most routine of through passes and forward Morales stole the loose ball and rounded goalkeeper Thibaut Courtois to score.

Levante stunned the home fans into silence when they were awarded a penalty in bizarre circumstances for a handball by the hapless Varane on the line of the penalty area, which was finally given after consulting the video assistant referee (VAR) just as the visitors were about to take a free kick.

Courtois guessed the right way but Marti’s penalty was too powerful for him.

VAR was called into action five minutes later to cancel out a goal for Real from Marco Asensio for offside, the first of a flurry of chances for the home side which saw Mariano hit the crossbar and Levante’s former Barcelona goalkeeper Oier Olazabal make a string of impressive saves.

Olazabal made another superb save after the interval to thwart substitute Bale while fellow sub Benzema hit the post after Marcelo had reduced the deficit to a single goal.

Mariano thought he had found a leveller late on when he converted from close range but the goal was ruled offside.

1 GAA players spend just 2.5 seconds within 2m of each other during play
2 How a GAA club sprang up in east Belfast over Sunday breakfast
3 The Irish Times shutdown sports quiz: Part one
4 Premier League to allow five substitutions per team when games resume
5 ‘Why do you need the money now?’: Schalke apologise for ticket refund questions
Real news has value SUBSCRIBE
Crossword Get access to over 6,000 interactive crosswords