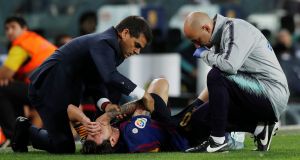 Barcelona captain Lionel Messi will be out of action for three weeks after he fractured his right arm during Saturday’s 4-2 La Liga win over Sevilla, a club statement said.

The injury ruled him out of next Sunday’s ‘Clasico’ against arch rivals Real Madrid.

Ousmane Dembele replaced Messi in the 25th minute after the Argentine was examined by club doctors on the sidelines following a challenge by Sevilla’s Franco Vazquez.

The Barca talisman, who had set up Philippe Coutinho’s opening goal in the second minute and scored their second, looked in serious pain as he left the pitch with his right arm in a bandage. In addition to missing the ‘Clasico, Barca’s all-time top scorer will be unavailable in Wednesday’s Champions League clash at home to Inter Milan and the return game in Milan on November 6th.

This season’s ‘Clasico’ will already be without Cristiano Ronaldo after he left the Spanish capital for Juventus during the summer.