Manager ready to use €50m signing against Red Star Belgrade 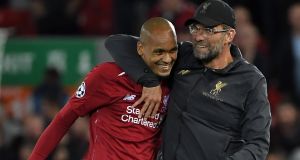 Jürgen Klopp believes Fabinho’s reserved nature has contributed to his slow start at Anfield but that the £43.7 million signing is ready to show he will be “a fantastic addition” to Liverpool.

The Brazil international is in contention to make only a second start since his summer arrival from Monaco when Red Star Belgrade visit Anfield in the Champions League tonight.

Klopp, who has called for a reaction to Liverpool’s lame defeat at Napoli last time out, is without Jordan Henderson and fellow midfielder Naby Keïta owing to hamstring injuries, while Adam Lallana’s start at Huddersfield on Saturday was his first for seven months.

Fabinho, who turned 25 on Tuesday, has had little opportunity to impress because of James Milner’s and Georginio Wijnaldum’s commanding form, plus his own adaptation to Klopp’s style. And the Liverpool manager believes the Brazilian’s quiet personality has also been a factor.

Klopp said: “He has had to adapt to the style of play and, if you watch Fabinho playing at Monaco, he was full of confidence. You come to a new club and it depends a bit on your personality. He’s not the loudest person on the planet.

“It’s not that he’s come in and said, ‘Sit down all of you and I’ll explain how we do it because Monaco were in the Champions League semi-final the year before and became French champions.’ He is more a reserved person, looking, watching, absorbing, and it always takes a little bit more time. But on the pitch he is back now and that’s good now. All fine.

“It is his birthday so it would be a nice present. I didn’t make the starting line-up yet but he has been here a few months now, got used to a few things, and so we will use him.”

Fabinho’s only start this season was in the Carabao Cup defeat by Chelsea but Klopp insists the player, who has also made three substitute appearances, has the attributes to flourish at Liverpool. “He has all the qualities – hard challenges, good offensively, good defensively, quick, good shooter, fantastic set-pieces, good header; all these things. Strategic, too, he is good strategically in the right moment. But it’s been a different system. We just play different and that always needs time. He’s just a fantastic addition and can improve us from a specific moment on.

“Go back a year and look at Andy Robertson. He played one or two games by this stage, not too many, and then he became the player he now is. We cannot – I cannot – shorten the time it takes [to settle]. Maybe somebody can but I can’t. Ilkay Gündogan needed more or less half a year [at Borussia Dortmund] without being in the squad, more or less. After that he played pretty much each game. That’s how things go.”

Klopp admits Liverpool must rediscover the Champions League form that carried them to last season’s final and overcame Paris Saint-Germain in the first home game. “Naples was our worst game so far for different reasons and now we have to show we still know how it goes.”

He also expects Red Star, banned from selling tickets to their fans for this game following a pitch invasion after their play-off victory over Red Bull Salzburg, to come with a defensive mindset, having lost 6-1 at PSG three weeks ago.

“I don’t know how big the impact will be but I know they look naturally confident,” Klopp said. “They were not the complete outsider with no chance and shaking before Napoli. They were confident. In Paris it can happen. It will happen to other teams and happens to others in France constantly. But after a 6-1, with another away game, it is possible they will be more defensive.”

“For us it is really important the whole stadium uses our experience from last year. Atmosphere makes the difference and especially in games like this.” – Guardian