A cautionary tale: The life and death of one-armed striker Jimmy Hasty

Remarkable ex-Dundalk player became another tragic casualty of the Troubles 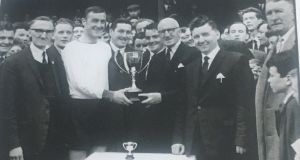 Dock Street, Belfast: a grey, midweek October lunchtime. As the American Bar opens its doors optimistically, a juggernaut zooms by bound for one of the waiting ferries and from there on into Britain and, perhaps, beyond. Frictionless trade, we’ve learned to call it.

Inside, the trade is less noisy, but it’s early. This is a proper bar, there is some football memorabilia, scarves from clubs across Europe and, as you look around, the eye is taken to a black-and-white photograph.

It is of a player in a white shirt and black shorts collecting a trophy. It turns out the cup is Dundalk FC’s footballer of the year award for 1965. The player is holding it with his right hand. This is because he has no left arm. It is Jimmy Hasty, the one-armed footballer.

A sense of wonder always accompanies reaction to the first hearing of Jimmy Hasty. What? Really?

Yes, it is true, Dundalk’s leading scorer for three seasons in the early 1960s was a 6ft 1in forward with one arm. In 170 games for Dundalk, Hasty scored 103 goals.

The most famous of those came in the 1963-64 European Cup against FC Zurich. Hasty’s 19 goals had helped Dundalk to the League of Ireland title the previous season, their first for 30 years. He was a local hero at Oriel Park.

Against Zurich, Dundalk lost their home leg 0-3 in a game moved to Dublin, but in the return, Dundalk went 2-0 up. Hasty scored the second and then hit the bar. Zurich got one back to progress 4-2 on aggregate.

But an Irish side had won away in Europe for the first time. An indication of the achievement came when Zurich beat Galatasaray in the next round and PSV Eindhoven after that. The Swiss champions reached the semi-finals. In the first leg they again lost at home, as they had to Dundalk, only this time the team winning by the 2-1 scoreline was Real Madrid.

“Born in Sailortown in 1936, Jimmy was destined for a life labouring on the docks” – begins the appreciation in the American Bar, “but lost his left arm in a milling machine accident on his first day at work, aged just 14.”

The brutal accident, and its shock, could have defined Hasty’s life in a negative way. Maybe it did limit his opportunities – there was apparently interest from Nottingham Forest but issues with insurance. Still, Hasty made his way from playing amateur football for Islandmagee to Newry Town and then onto Dundalk.

The club director who signed him, Jim Malone, found a degree of consternation when he informed the rest of the board that he had signed a one-armed player. Once they observed Hasty play – scoring on his debut – and the crowds he attracted, their questions stopped.

Judging by contemporary reports, Hasty was an unsuitable surname for a player of Berbatov poise and class. Unfortunately there was no footage to back up such claims. Then, three years ago, Radio Ulster, researching Hasty’s story, found some in Switzerland of the Zurich-Dundalk second leg. And indeed, here was a player of confident calmness and, in scoring Dundalk’s second, speed and bravery. It’s great footage. There is a swagger – and balance – to Hasty only the talented possess.

Hasty stayed at Oriel Park from 1960 to 1966. He joined Drogheda briefly, then moved back to Belfast to work.

Footballers’ lives have a second half, when they are no longer playing. Hasty started a family and got a job in a bookmaker’s. In October 1974 he was walking along Brougham Street – adjacent to Dock Street – when a loyalist paramilitary gunman stepped out and shot him.

Driving to his job in the advertising department of the Belfast Telegraph was 25 year-old George Larmour. His routine was to first drop off his wife Sadie at her workplace, Gallaher’s.

That morning, just before eight, Sadie said she heard shooting. Rather than speed away, George Larmour told her to get out while he drove further down Brougham Street. There he saw a man lying on the pavement.

Larmour got out of his car, took two coats from it and covered the stranger, who was still breathing. He spoke to the dying man, tried to reassure him. If it matters – and it did – a Protestant was holding a Catholic shot by a Protestant. All from the same small place.

Larmour shouted for help. There was no-one around he could see, but someone heard because an ambulance arrived. So did the police. One policeman, seeing Jimmy Hasty, “appeared upset at recognising him”, as Larmour was to say.

Larmour did not know who the victim was until news reports confirmed Hasty’s death. Jimmy, he discovered, had a wife, Margaret, and two sons, Martin and Paul.

Larmour broke down. He was not alone. When Dundalk heard the news there were tears and revulsion. Hadn’t Jimmy Hasty suffered enough.

It was October 11th 1974. In Lost Lives, the 1,648-page catalogue of murder in the modern Troubles, Jimmy Hasty’s entry is on page 483, numbered as victim 1205. His murder was claimed by the Ulster Protestant Action Group, a cover for the UVF.

Bloodshed begat bloodshed. “Tit-for-tat”, “spiral of violence”, “last night another soldier”, the lexicon of a warped society pretending to be normal became everyday.

George Larmour could not forget Jimmy Hasty or his young wife Margaret. It took him 30 years to tell her this, about what had happened on that morning of October 11th.

Larmour wrote to Margaret and reproached himself for not doing it sooner. In his letter he included details of another October 11th, this one in 1988.

By then, George and Sadie had opened an ice-cream parlour on the Lisburn Road. After a few months getting it going, they had gone on holiday. George’s brother John stood in. John was a good amateur footballer.

Just before closing on the 11th, two men, ostensibly customers, turned up. One stood at the door while the other asked about flavours on offer. Then he pulled out a gun and shot John Larmour four times.

John Larmour was in the RUC. The two men were in the IRA. The second gunman, seeing a teenaged girl and boy in the parlour, shot them too. They survived but Larmour did not.

Those interested in poetry may know of the Michael Longley poem called The Ice Cream Man, the opening lines of which are:

You would rhyme off the flavours. That was before

They murdered the ice-cream man on the Lisburn Road

And you bought carnations to lay outside his shop.

It nearly knocks you over. One year later, on October 11th 1989, George Larmour buried his father, who had died from a broken heart at the murder of his son John.

The news bulletins were always shorter than the repercussions. We still feel them. Who we remember, what we remember, how we remember; all of this is in debate. George Larmour’s goodness is not.

In the American Bar, landlord Pedro Donald says he put up the pictures of Jimmy Hasty because “while I was aware of his story, it’s only when we took over the bar that we realised he was a Sailortown boy. We wanted to acknowledge that”.

Hasty’s sons have been in, one brought his own son who was doing his school project on his grandfather.

There is much to learn. This feels like another serious October, with blood-red lines drawn and frictionless status in jeopardy.

The good news is those tragic news bulletins have ceased but it would be a stretch to say Belfast is at peace. Down on Dock Street, with respect and sadness, it is a time to raise a glass to the man with the quiet smile on the wall of the American Bar, Jimmy Hasty, to celebrate him, his goals and skill, to remember what there is and how it was.