All in the Game: No Moore medals for Steven Gerrard

Being marked by van Dijk, poo-gate at Hillsborough, and Sol Campbell’s memory 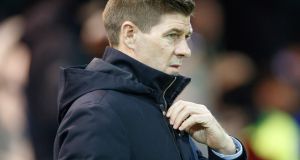 “We’re like a shark that smells blood in the water, focuses and attacks. We’ve developed a killer instinct.” Liverpool goalie Alisson whose team, yet again, snatched victory from the Jaws of a draw on Saturday.

That’s the date in March when Liverpool could actually wrap up the Premier League, so long as they keep winning and their rivals (word used loosely) slip up. That’d be a whole five weeks earlier than the record held by Manchester United. Strewth.

The very best story told last week about a brush with Virgil van Dijk: That’d be the one shared with the Examiner’s Larry Ryan by Waterford’s Graham Cummins.

Talking about his time playing for St Johnstone, Cummins recalled being marked by van Dijk in what proved to be his last game for Celtic before he moved to Southampton.

“The first ball, I tried to sprint with him and he just boshed me out of it,” said Cummins. “I was out of breath and blowing out of my backside and he just turned to me and said: ‘I wouldn’t even bother, I’m just too good’.”

Best post-match exchange between a manager and a TV interviewer last week. We’ll go with Sol Campbell’s chat with a Sky Sports person after his side had lost 4-0 to Peterborough in League One.

Campbell: “I got to say, the young lads - for quite a few of them it was their first game for Southampton - they played really well . . . ”

Interviewer: “Can I stop you? Do you want to do that again?”

Interviewer: “Because your team’s Southend.”

“Sometimes I like to feel the cold weather, but this time was not the case. I fell asleep [in the barber’s chair] and when I woke up it was so bad that I said to him ‘bring the [NUMBER]one’. Hopefully, it will grow back again.” José Mourinho explaining the disappearance of his hair.

“The difficulty of the midfield is psychological. Pjanic seems to be as soft as mozzarella.” Former Juventus President Giovanni Cobolli Gigli somewhat questioning the steeliness of Miralem Pjanic.

“There was a time just before Christmas when Andy had made a few assists and started a few games but unfortunately he volleyed a ball and hasn’t been the same since.” Steve Bruce on the cause Andy Carroll’s latest injury: ball-volleying.

How about the Sheffield Star’s “Sheffield United fan who had a poo on Hillsborough pitch breaks his silence over ‘nugget’.”

Granted, your lunch would have needed to be well digested before you read on, but the gist was that this gentleman broke in to Sheffield Wednesday’s Hillsborough stadium with a few other Sheffield United-supporting mates, and pooed on the centre spot, like you do. His mates filmed the momentous moment and, need it be said, the video went viral.

So proud was he of his accomplishment, the Star told us, “he changed his Facebook profile picture to show him crouching at the centre spot and giving the thumbs up sign next to the excrement”.

He defended his actions, though, which have been reported to the South Yorkshire Police. “All of the comments about poo-gate have tickled me. It was only a nugget chaps. Get over it.” Thoughts and prayers to those tasked with scooping the poop.

Best response from a national postal service to a manager who suggested working for them was a piece of cake: We’ll go with Poste Italiane’s reply to Juventus gaffer Maurizio Sarri after he said “if I didn’t want to be under pressure I would have worked at the Post Office”.

Over to you, Poste Italiane: “Contrary to what Mr Sarri claims, pressure does exist at the Post Office. It is responsible to citizens, businesses and public administrations. Poste Italiane invites Mr Sarri to spend a few minutes of his precious time discovering that the Poste is the largest company in the country, chosen by young graduates as one of the most attractive companies to work with, which has achieved one of the best stock market performances in 2019 and ranks third, worldwide, among Italian companies in terms of image and reputation. We are waiting for him in one of our 15,000 centres so that he can see our daily work in person.”

If Maurizio is waiting for an urgent letter in the post, we wish him well. You sense it might get, you know, lost.

Moore rules out ‘medal for Gerrard’

Peter Moore, the club’s chief executive, presumably assumed that those who were suggesting that this should happen were jesting, but on discovering that they were actually being serious he set about explaining, very patiently, why it was a non-runner.

“Look, we all love Stevie G, but I keep seeing this ‘bring him in on a five-day contract so he can win a medal’ . . . the question I ask you is: which player do you want to cut from the squad to make that happen? And if you haven’t noticed, he’s the employee of a different football club at the same time as well. Thirdly, you can’t add a player to a squad once it’s locked. Other than that, it’s really possible.”