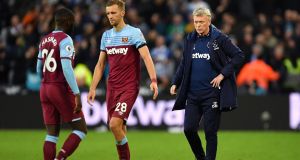 Everton midfielder Fabian Delph misses out as he serves a one-match suspension after his red card at Watford last weekend. With Andre Gomes (ankle) and Jean-Philippe Gbamin (thigh) still out injured Carlo Ancelotti has only three fit central midfielders in Tom Davies, Morgan Schneiderlin and Gylfi Sigurdsson and they are competing for two places. Gomes is set to play in a friendly in the lead up to Everton’s match at Arsenal on February 23.

Crystal Palace forward Cenk Tosun, on-loan from Everton, will be ineligible to face his parent club on Saturday, but would have been unavailable anyway with a hamstring injury. Mamadou Sakho (hamstring) and Jeffrey Schlupp (hip) both remain absent for Roy Hodgson ahead of the trip to Merseyside. The versatile Martin Kelly will also miss the clash at Everton after suffering a calf injury, but he is not expected to be sidelined for long.

Brighton manager Graham Potter has no fresh injury concerns to deal with. In a further boost for the Seagulls boss, Shane Duffy trained on Thursday, after he missed the West Ham match following a minor operation, while Dan Burn has been making progress from a shoulder injury. New signing Tariq Lampty has been settling into the squad, but the manager suggested Saturday’s match could come too soon for the former Chelsea player.

Tom Cleverley returns from injury for Watford in their Premier League trip to the south coast. The former Manchester United man has been sidelined since October with an Achilles injury. Kiko Femenia (knee) is nearing full-fitness, while Ismaila Sarr (hamstring) is unlikely to feature. Adalberto Penaranda is available after returning from his loan spell at Belgian side Eupen.

David McGoldrick could be back in the Sheffield United squad. The former Southampton striker has missed the last four matches with a foot problem but Blades boss Chris Wilder said he had been “back on the grass” this week. Club-record signing Sander Berge looks set for his home debut after an assured first appearance at Crystal Palace last week while fellow new arrivals Richairo Zivkovic and Panos Retsos will hope to be involved.

Josh King could be fit for Bournemouth. The Norway forward has been struggling with a thigh issue, but could be ready to face the Blades. Jack Stacey could also shake off his own thigh issue to feature at Bramall Lane, while Junior Stanislas could be ready for a start after taking a seat on the bench against Aston Villa.

Manchester City are without Raheem Sterling due to a hamstring injury that could keep him out a few weeks. Left-back Oleksandar Zinchenko is suspended after last week’s red card at Tottenham but Benjamin Mendy and John Stones are both in contention after missing recent games. There is still uncertainty over the fitness of centre-back Aymeric Laporte, who returned from a long-term knee injury last month but has not been risked in the last three games.

Jarrod Bowen will be added to the West Ham squad following his deadline-day switch from Hull. Felipe Anderson is back in training after a back injury and could also be involved. Andriy Yarmonko is building up his fitness after a thigh problem and Jack Wilshere has had a hernia op.