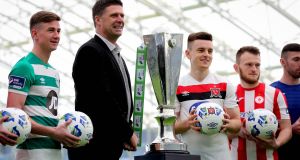 Niall Quinn has insisted he is still of the belief that a strong League of Ireland is absolutely central to the future fortunes of Irish football with the FAI’s interim deputy chief executive believing the country’s senior clubs are the best vehicle available to drive a wider transformation of the game.

Divisions between the game’s various sectors have persisted at recent FAI meetings with representatives of other leagues and affiliates expressing scepticism about the wisdom of investing heavily in the senior game.

Speaking at the launch of the 2020 SSE Airtricity League campaign, however, Quinn said the association is obligated as well as committed to prioritising the League of Ireland under the terms of the deal done with Government last week. Doing so, he suggested, will have far-reaching benefits for Irish football.

“We believe an elite League of Ireland in rip-roaring shape lifts the whole game with it,” he said at the National Sports Campus in Abbotstown.

“Until last Thursday we had no money to do anything,” he continued, “but the League of Ireland gets a serious mention in terms of the document. So, we have no choice but to help League of Ireland clubs. The way I would put it now is the new-look FAI is now an enabler for League of Ireland, it is not a blocker. That’s quite important.”

Already at the planning stage is a central association office to provide supports to the clubs as they seek capital funding for the improvement of stadiums and other infrastructure, something most have been poor enough at securing to date. Beyond that, Quinn says, he and the rest of the new faces at the organisation will listen to what the clubs tell them they need and go from there.

“We would like every club with a strong academy playing national league football at underage levels and the quality coaches we have working with the elite so that those elite players are getting hours of fabulous coaching...

“We know our priorities, they are written on that agreement, so we can’t sit back, have three months, and say: ‘Eh, do you know what, we’ve changed our mind and we’re not going to do anything about the League of Ireland’. That ain’t gonna happen guys.

“But we will listen to the clubs. I think we need a settling-in period to understand things. We’re not overflowing with money, but what we have for the first time is optimism in the air and we will do it as best we can, given the circumstances.

He also said the association will be open to the clubs’ idea with respect to a new governance model for the league but he suggested that the IFA would have to be on board for the FAI to back the proposed All Island League.

“What is very important that we don’t jump ahead of our friends in Northern Ireland so that if we are doing stuff, we are doing it together,” he said. “I must be absolutely respectful and our Association must be respectful to the needs of the Association and the league up north.”

Kieran Lucid continues to explore how to progress his plans and following on from the recent sessions with Dutch consultancy firm Hypercube, another meeting of clubs is understood to have been called for the middle of the next week.

1 Golf in Level 5 Covid restrictions: Clubs still waiting to hear if they can remain open
2 Gordon D’Arcy: Ireland don’t need to do a Finn Russell on it
3 Hugo Keenan could start in changed Ireland team against Italy
4 Man United’s latest Parisian party more impressive than heist of 2019
5 Aki, Ringrose and Henshaw: Brian O’Driscoll has his say on Ireland’s midfield riddle
Real news has value SUBSCRIBE
Crossword Get access to over 6,000 interactive crosswords