It’s a two-tier set-up at the Nou Camp: Messi and his friends, and then everyone else 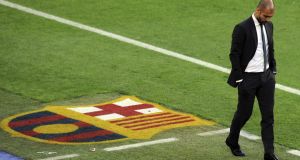 Under Pep Guardiola Barcelona played a kind of football that had never been seen before. Photograph: Sergio Carmona/Reuters

Four-and-a-half years ago, Barcelona beat Juventus in Berlin to become the first European club side to win the treble of league, cup and Champions League twice.

The team was led by the Messi-Suarez-Neymar attacking trio that scored 344 goals in three seasons between 2014 and 2017. In my report for The Irish Times I wrote that it felt like Barcelona were living the dreams of Real Madrid president, Florentino Perez: “With Qatar on their shirts and galactico signings supplanting academy players in the side, Barcelona are metamorphosing into something more like the team Florentino Perez wishes Real Madrid could be. But though the identity is changing, the trophy-winning dynasty looks as powerful as ever.”

One reason why it’s unpleasant to reread old work is having to watch yourself making mistakes that should have been obvious to you at the time. Yes, it was true Barcelona by 2015 had grown into something like Perez’s galactico ideal. Messi, Suarez and Neymar were three of the four best attacking players in the world.

But that very parallel should have been a hint the conclusion in the next line was wrong: “The trophy-winning dynasty looks as powerful as ever.”

Babbling about Barcelona’s brilliance I had forgotten something more important, which is that no really great football team has ever been built according to the ideals developed by Florentino Perez when he was a little boy cheering on Puskas and Di Stefano.

Little Florentino was like a lot of fans, he liked the players who scored the goals and didn’t really notice the others. When he became president of Real Madrid his ideas were packaged into a sort of philosophy by Madrid’s marketing department and given the name “Zidanes and Pavons”. You have your Zidanes – your world superstars – and then you’ve got your Pavons, after the then-youthful central defender Francisco Pavon – a second tier of players who come mostly from your youth system, good honest lads who are grateful to be there.

It didn’t work, for reasons that should have been plain before the project began. Past generations of Real Madrid youth teamers had dreamed of becoming a star for the first team, like Butragueño or Raúl, but under the galactico system it was impossible for a Pavon to become a Zidane. And only attackers could be Zidanes; so goalkeepers, defenders and most midfielders were automatically considered second tier. Perez’s system trapped most of the squad in a permanent underclass.

Zidane himself was against it, famously criticising the club for selling Claude Makelele – a Pavon – to Chelsea. He understood a player could be important even if Florentino Perez couldn’t see the reasons why. But Madrid pressed on. When the team won, the Zidanes got all the credit. When they lost, a Pavon or two would be dropped to the bench. Whether they won or lost, the Zidanes were getting all the money and attention. And because the Zidanes arrived as ready-made superstars already at the peak of their careers, within a couple of years they were all too old, while the Pavons had grown resentful and disillusioned.

After two league titles and one Champions League in six years, a trophy haul that mocked Madrid’s claims to be the greatest club side in history, Perez stepped down as president. It turned out a football team is too small a society to sustain a rigid class system. If everyone doesn’t feel like they’re in it together, the truth is soon revealed on the pitch.

Lionel Messi won his first Champions League title that season as part of a Ronaldinho-inspired Barcelona team that looked likely to dominate for the next few years. But it didn’t really happen for that side either: Ronaldinho was drinking too much and they stagnated. It took the 2008 arrival of Pep Guardiola to re-establish them as the defining team of the age.

Under Guardiola, Barcelona played a kind of football that had never been seen before. For this reason his time at the club is now looked upon as a golden age, and all subsequent iterations of Barcelona – even the Messi, Suarez, Neymar team – have been criticised for failing to articulate the club’s supposed values with the purity of the Guardiola years.

Which values are we talking about – what was it that made the Guardiola team great? Today it often seems to be remembered in terms of technique and tactics, something to do with how they moved in relation to the ball and each other, the “carousel” of midfield passing as Alex Ferguson called it, the distinctive patterns of their play and their manipulation of space. The subsequent teams have been castigated for departing from this geometric ideal. Luis Enrique’s team won trophies but they were a bit too fond of the fast counter-attack. Valverde liked 4-4-2 – caveman football from the point of view of club orthodoxy.

These technical and tactical points are more or less accurate. But thinking of the Guardiola style as a set of geometric principles that could be applied again at any time by a coach who had the courage to honour the true traditions of the club and go “back to basics”, is to forget the collective ferocity that underpinned everything the Guardiola team did. They ran for each other because he made them feel like they were all in it together.

His first act as manager was to show the door to the stars of the last team: Ronaldinho, Deco and Samuel Eto’o (who ended up staying one more year). His thinking was: even though these are among the best footballers we have, their attitude undermines the team spirit without which we have nothing.

That’s the part of the Guardiola formula that Barcelona have forgotten. It’s not really to do with coaches who lack courage playing too many direct passes, or too many long passes, or having the wingers too narrow, or not establishing proper control in midfield before they start their moves. The bigger problem is that this isn’t really a team any more, and it hasn’t been for a long time. It’s a two-tier set-up: Messi and his friends, and everyone else.

It’s not that Messi is a problem on the field, as though he has slowed down so much at 32 that team-mates have to carry him about in a sedan chair and end up too exhausted to do their own jobs. Messi is the best footballer in history – that argument is over – and he continues to be the best player in nearly every game he plays.

It’s more that he has become the planet around which the whole club revolves. Everything is warped by his gravitational field. New signings must serve him first and they are measured in terms of how successfully they relate to him. Is it any surprise a series of brilliant players – Philippe Coutinho, Ousmane Dembele, Antoine Griezmann, Frenkie de Jong – seem to have shrunk in the presence of the great one? They are not free to be themselves.

A report in El Pais over the weekend claimed that Griezmann, a €120 million summer signing, had at last started to win some acceptance in the squad after his former team-mate from Atletico Madrid, Diego Godin, called up his Uruguay team-mate Luis Suarez, who is also Messi’s best friend at Barcelona, to tell him “Antoine’s alright really”.

This would be a silly situation in a school team, never mind a club with ambitions of winning the Champions League. But that, apparently, is where Barcelona are at. And it won’t matter whether they are trying painstakingly to recreate the patterns of the Guardiola team of 10 years ago, or playing some basic 4-4-2. Without unity of purpose, the great days are never coming back.