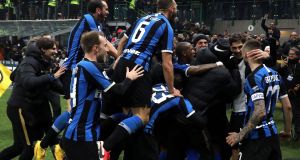 Antonio Conte insists it is still too soon to tip his Inter Milan side as Serie A title contenders despite going top of the table on Sunday.

Inter jumped to the summit ahead of Juventus on goal difference after the eight-time reigning Serie A champions slipped up 2-1 at Verona on Saturday.

However, Inter boss Conte will not get ahead of himself.

“Scudetto? I say it is still too early to talk about things we can dream of today,” Conte told Sky Sport Italia. “It’s inevitable that this period of 10 games will be quite intense. If after this period we will still be there, we will be able to say more about our potential and possibilities, perhaps different from the beginning.

“Already on Wednesday there is the Coppa Italia (semi-final) against Napoli, then Lazio, who have always been strong. It takes patience and it takes time.”

Veteran hitman Zlatan Ibrahimovic teed up Ante Rebic then scored himself to wrestle full control for Milan at the break. But Inter turned the tide after the interval, and in some style.

“The credit goes to the kids because, beyond the result, being able to resist the blows in times of difficulty means wanting to grow and do something good,” said Conte.

“There was no need to talk so much during the interval. When we are in difficulty we must be very clear.

“I first had responsibility for the fact that we were behind and how we were playing in the first half.

“So we united to get out of difficult situations. We will have to keep this in mind for the future.”

Milan boss Stefano Pioli admitted the defeat leaves a “bitter” taste in the mouth, especially given his side’s total control at half-time.

“I’m angry with the players because we had defensive tasks,” Pioli told Sky Sport Italia.

“They also had a bit of luck, we hit two posts. I have to be bitter. I have to make these players understand that if we want to stay at a certain level, attention and lucidity are too important.”