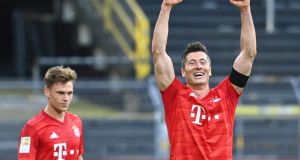 James Richardson was struggling a little bit to find the words to describe just how monumental this Bundesliga battle of Bayern Munich and Borussia Dortmund was, in the end settling for: “It’s the tastiest thing at the top of the German table since . . . bratwurst.”

Raphael Honigstein, sitting two metres from him in the BT Sport studio, wore a face that kinda said “ah jaysus”, but by then he’d already heard James danke schoening Germany for giving us football in our hour of footballing need, while describing the rivalry between the two teams as “a battle as bitter as a German beer”.

That, though, would have been inappropriate, largely because the technology being used for the occasion was pretty basic, like when James introduced us to Archie Rhind-Tutt who was reporting from outside Signal Iduna Park with what appeared to be a phone sellotaped to a selfie stick.

Archie was, of course, close enough to being alone outside the stadium, the Yellow Wall, no more than ourselves, watching it all on telly, and there weren’t all that many souls inside either, which left you wondering about the need for that stadium announcer.

James, then, was robbed of the chance to talk about the electric atmosphere, when there was no atmosphere at all, but as compensation he showed us a bunch of UK-based Bayern and Dortmund fans on Zoom, all of whom waved back enthusiastically at him when he said hello. A little part of all of us died when we wondered if this would be the nature of football match attendances for the foreseeable future. As Paul Dempsey put it later in the evening, “we’ll never get used to it, will we?”

But we’ll just have to, like Paul will have to get used to working an eight-day week now that he’s our voice of German football, for once BT and himself justified in declaring the channel to be ‘the home of football’ when there’s bugger all football anywhere else. Spare a thought for Sky, they’re now close enough to being reduced to showing replays of the 0-0 between Dagenham and Redbridge and Accrington Stanley in February 2007.

Owen, at least, knows his Bundesliga, largely because he played there with Bayern, although he somewhat revealed his more regular telly punditry loyalties when he was swooning over Raphael Guerreiro. “What a player! I’d love to see him in the Premier League, ” he said, like the Bundesliga’s current showcasing exclusivity is just a dress rehearsal opportunity for its protagonists to seal a move to Burnley or Bournemouth.

By the way. You know how we’re all checking what books our lockdown telly people are currently reading? And don’t lie, you’re snooping too - and judging these folk by their choices. Owen had just two tomes on the table beside him, Interior Design Review and a book by Tom Ford. Make of that what you will. But it was hard not to note that he had neither Macca nor Martin’s autobiographies.

Anyway, the teams were in the tunnel, for once not disciplined for elbowing each other, the referee looking particularly chirpy, possibly because he knew the absence of a crowd would mean he wouldn’t be called a “*anker” for 90 minutes.

James and Raphael had promised us a ton of goals, but in the end we had to settle for just the one. As tasty as a bratwurst it was too. “A lovely chip, we call it a lob in German,” said Raphael of Joshua Kimmich’s match winner, a lob in any language.

“Der Klassiker is a simple game,” James concluded. “22 men chase the ball around for 90 minutes - and Bayern win.” A familiar line. But that’s just about the only thing that was familiar about this Der Klassiker. Well, apart from Bayern winning. Again.