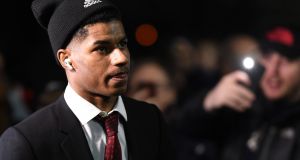 Marcus Rashford has turned his attentions towards helping his loca community during the coronavirus pandemic. Photograph: Oil Scarff/AFP via Getty Images

Who knew that Greater Manchester had a sheriff? And how many of us would have guessed, if pushed for an answer, that his name is Eamonn O’Neal? And if Boris Johnson can become prime minister of Great Britain, then why not Marcus Rashford?

2020 will go down as a dark and grotesque period in the official political history of the United Kingdom but through the debris are shining examples of the best of that society.

Manchester United’s Marcus Rashford has been among those. After the Premier League was suspended, Rashford quickly began to turn his energies towards his local community. When the schools closed, he was quick to figure the implications and put both his fame and money behind the Fareshare UK charity, which was set up to provide free meals for people who might otherwise go hungry.

As a child who grew up in Wythenshawe in the late 1990s – the era of prosperity and Cool Britannia and smiling Tony Blair remember – he could relate to this. “My mum worked all day every day when I was growing up to make sure I had at least one meal on the table every night,” he said recently. “I needed the Breakfast Club and school meals – otherwise I didn’t eat until eight or nine at night.”

In late March, the charity was hoping to reach 400,000 people with daily meals. When Rashford got involved, they had around £50,000 in donations. Now that figure has ballooned to £20 million. This week, Rashford made another personal donation and the charity is edging close to supplying three million meals across the UK by the end of June.

A follower from Norway was among the hundreds of replies when Rashford messaged news of the progress: he was pitching in with an apologetic fifty quid. He had been laid off and couldn’t afford any more. Rashford messaged back: ‘Mate, that £50 will go a long way. Thank you so much.’

On this evidence alone, who is doing more good for his country: the United striker or the prime minister?

Rashford’s social conscience is nothing new and none of this makes him a saint: countless people contribute charitably and civically in all kinds of ways. But during a time when Britain is stalked by fear and loathing, during a period when the country’s political class is exposed as fraudulent and out of credibility, there is something incredibly powerful about the idea of one of the Premier League’s gilded footballers rolling up his sleeves and just quietly and steadily helping other people around him.

And it causes an instant flash of recognition, like Housman’s Land of Lost Content – oh, yeah, that United Kingdom, that England . . . the place that once had Clement Atlee in Downing Street.

Almost a year has passed now since the critic and writer James Wood wrote a disturbing and funny essay in the London Review of Books about watching in appalled fascination as his former school mates at Eton –which he attended on scholarship – blithely step into the positions of powerbrokers and future-makers of the UK. The rise of David Cameron was the first shock – “Wasn’t he that affable, sweet faced minor fellow at the edge of things?” – but worse was to follow when Jacob Rees-Mogg began dominating the headlines. “He was four years below me, notorious as soon as he arrived, because he never seemed young.” It’s an alarmed and bewildered exposé of the class system and hidden connections and delusions on which England/UK has been run for centuries and includes this unforgettable pen picture of its current hapless prime minister.

“Johnson, by the way, looked pretty much the same at 15 as he does at 55 and was a familiar sight as he charged and flapped his way around the college lanes. The bigfoot stoop (he was known as ‘the Yeti’), the bumbling confidence, the skimmed milk pallor, the berserk hair, the alarming air of imminent self harm, which gave the impression that he had been freshly released from some protective institution: all was already in place.”

The writer, of course, hardly belonged to the England captured in the films of Shane Meadows: his dad was a lecturer and his mum a school teacher. But at Eton, he felt acutely aware that he did not belong in this opaque world of money and entitlement. And Marcus Rashford belonged to a different social class again – with those millions of immigrant grandsons and granddaughters who are expected to remain pliable and invisible.

Football is a business and it is more unforgiving and brutal than politics, where you can bumble and fail again and again. If Rashford’s promise had not materialised, if he had suffered an injury or lost form at the wrong time, then he would have been discarded. He just happened to be blessed with a preternatural gift for football and showed such promise that even in Manchester, where these places are fiercely prized, he was part of the United academy by the age of seven.

And Rashford has emerged as one of the leading figures in a strange period for Manchester United, when the club is still drifting around in the tidal wave created by Alex Ferguson’s departure while desperately trying to hit upon the right combination of manager and team. It’s caught in the precise vacuum that knocked its neighbouring rivals Liverpool off course for a full 30 years, unable to reimagine itself after a prolonged run of glory and achievement.

Rashford is one of those in the spotlight as the man who holds one of the most exalted and lonely roles in all of football: the leading man up front. It would be easy for him to focus on himself and that pressure to perform and to remain silent and wealthy. Instead, it was no surprise that Rashford should emerge this week as one of the most prominent football voices on the protest movement that has swept the United States for the past week.

“Black lives matter. Black culture matters. Black communities matter. We matter,” he said during a message. It’s fairly simple and obvious. But Rashford can reach entire swathes of young English people to whom Jacob-Rees Mogg and the old Etonians simply don’t exist. He is 22-years-old and he’s about to return to a football that for the first time doesn’t need to be more than just a game; it is enough for football to be mere entertainment and escapism.

Soon the debate on the consistency of Rashford’s on-field talents will return. But there is no real debate as to the true substance of the man. The pinned message on Rashford’s Twitter account is a photograph of the written Special Recognition Award presented to him by Eamonn O’Neal, the high sheriff of Greater Manchester for his ‘outstanding activity and contribution to the community’ – particularly during the C-19 pandemic. This is someone who has already lived the common sports fantasy – in attack for the Red Devils and for England. But it’s this local award that floats his boat. Manchester and England should cherish him.

Marcus Rashford had yet to make his senior debut when, in 2012, young Conservative Party members including Dominic Raab and Priti Pritel published Britannia Unchained: Global Lessons for Growth and Prosperity. It was a manifesto for their vision of the future.

“The British are among the worst idlers in the world,” was one of its more notorious lines.

“We work among the lowest hours, we retire early and our productivity is poor. Whereas Indian children aspire to be doctors or businessmen, the British are more interested in football and pop music.”

Eight years on and football and pop music may be all the British have left to believe in for now.