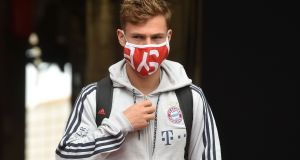 Joshua Kimmich’s Bayern Munich team has moved seven points clear of Borussia Dortmund at the top of the table since returning to action. Photograph: Getty Images

“This year we have to drink all the beer,” Joshua Kimmich says, his tone deadpan as he ponders how weird it would be for Bayern Munich not to have their traditional beer-throwing celebration in front of their supporters if they win the Bundesliga this season. “I cannot imagine it now. I just know that it is strange if you win a game at the Allianz Arena and cannot celebrate with your fans. But we don’t have the choice now.”

Bayern’s outstanding midfielder can be forgiven for his confidence. The German champions were motoring before the coronavirus pandemic brought football to a halt in March and they have effortlessly picked up the pace since the Bundesliga season resumed last month, gliding seven points clear of Borussia Dortmund at the top of the table since returning to action.

While Kimmich suggests that Bayern are not quite up to full speed, the numbers suggest otherwise: four successive victories, 13 goals scored, only two conceded. Hansi Flick’s side are closing in on an eighth consecutive title and could still emulate the treble-winning class of 2013. Kimmich has been pivotal to their awesome form, knitting everything together in midfield and surprising even himself when he scored a lovely chip in the crucial 1-0 away win against Dortmund last week.

Yet it was a disorienting occasion when the two biggest sides in Germany met at the Signal Iduna Park, with the match behind closed doors and the Yellow Wall empty. Germany has been the first major league to allow football to return but it feels surreal without supporters present.

“Normally you have more adrenaline and tension when you see 80,000 fans, screaming after every corner or chance,” Kimmich says. “You have to push yourself and your teammates. Normally when there are fans you are focused just because of that. You feel mistakes more. Also you feel more if you score a goal. It’s more emotional when there are fans.”

The Germany international thinks it is harder for home teams – there have been 18 away wins in 36 games since the Bundesliga returned – and players have had to adjust to follow physical distancing measures. “We are in the hotel with face masks,” Kimmich says. “On the bus when we drive to the game, when we sit together in the hotel and restaurants, everyone sits alone. It’s really different. In the locker room, we have two-metre distance, or more than one metre.”

The Premier League is due to resume this month and it has been noticeable that players in Germany are sustaining more muscle injuries, though Kimmich is unsure if the lay-off has changed the pattern during games. “It was OK for us because it was like a third pre-season. We worked a lot, first at home with the cyber-training and after in smaller groups, then with the whole team. Now we have the benefit.

“The physical factor is really important for us. I don’t know the difference between the normal games and these matches, if we run more or less, or it’s more intensive or less. We haven’t had muscle injuries yet, but I think it could be a problem when the new season starts because we won’t get a long holiday.”

Kimmich, who feels football’s return has lifted morale in Germany, was not worried before the big restart. “There was a health protocol. We knew at first that social life was resuming and then it was possible to play football again. We had the green light from the government. We are tested every three or four days and every day before the games. It is really safe.

“We are the role model for other countries. Not everybody thinks that it’s good football is back. But the system is good. We have to be distanced from each other, we have to wear masks, we have to take showers at home and not at the training camp.”

Kimmich is asked what Premier League players should expect without fans. “You can speak with each other. You can hear what the coach is screaming on the touchline. It is really different when you walk on the pitch. It is like a friendly, or the under-17s. You’re just on the pitch and you start.

“Normally I enjoy it when you walk out and see the atmosphere. This is maybe what I miss the most but the positive thing is you can speak to everybody and the focus is more on the game. There is no big show from the players any more – lying on the ground and screaming.

Kimmich rarely looks ruffled on the pitch. The 25-year-old burst on to the scene at right-back but was a midfielder in his youth. He has flourished in that position under Flick, who has revived Bayern since replacing Niko Kovac last November. “The coach gives us a good feeling, we press high,” Kimmich says. “We want to have good possession and most of all it is fun. You play football to have fun and you can see this on the pitch – we have fun as a team. With our style of playing, it is not just about winning 1-0.”

Kimmich’s partnership with Thiago Alcântara sets the tone and he displayed his confidence when he caught Dortmund’s goalkeeper, Roman Bürki, off his line with that clever chip. “It was not planned and I have never scored a goal like this before. I thought about it. We did a lot of shooting in training, where we worked in smaller groups. The angle is easier for the goalkeeper when he goes out, so in training I saw that maybe this was possible to try in the game. I tried it and … yeah!”

There are bound to be more celebrations at Bayern, who visit Bayer Leverkusen on Saturday. They have a German Cup semi-final against Eintracht Frankfurt next week and will expect to reach the Champions League quarter-finals at Chelsea’s expense if the competition resumes in August. Bayern thumped Frank Lampard’s side 3-0 at Stamford Bridge in the first leg of their last-16 tie in February.

That was an ominous show of intent from a club seeking their first European crown in seven years, though Kimmich errs on the side of caution after being asked if anyone can match Bayern at the moment. “There is no football in Europe,” he says, deadpan again. “But I feel we are the best team in Germany. We have two tough games in the league. If we win them, I am sure we will be the Bundesliga champions.”