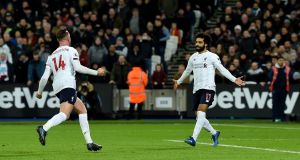 Mohamed Salah sealing the title for Liverpool to the sounds of War and Peace would be interesting. Photo: John Powell/Liverpool FC via Getty Images

When Tom Trbojevic went over for the first of his two tries for Manly Sea Eagles against Canterbury Bulldogs in the Australian National Rugby League on Sunday morning (look, you take live sport where you can find it), the crowd went wild, the cheering coming as such a humongous shock you’d have been close enough to falling off the couch.

It’s gas how quickly you get used to things, like the only sounds from live sporting contests coming from the pitch, apart from the occasional cry from the touchline, like, say, the Schalke coach hollering “SCHEISSE!” at his defence. (They are, too).

The Australian rugby league people, though, reckoned their viewers couldn’t be coping with this brand new normal, so have introduced canned cheering for their behind-closed-doors games, hence Trbojevic’s try being greeted loudly and enthusiastically, if entirely artificially.

The verdict on this innovation – which is already being tried out in Germany, with BT Sport even giving their viewers the option of choosing crowd sounds for their Bundesliga highlights show, just in case Steve McManaman isn’t enough – has been mixed, Australian writer James Colley, for example, not a fan. Instead of canned cheering, he asked “why not have an audiobook of someone reading War and Peace over the game?”

That would certainly be an interesting experiment, a Sea Eagles/Bulldogs scrum taking place to the strains of, say, “the march of humanity, springing as it does from an infinite multitude of individual wills, is continuous...”.

Or, when the Premier League returns, Mo Salah pouncing on a deflection to deftly score the goal that seals the title for Liverpool accompanied by “chance created the situation; genius made use of it”. That could work.

The group of supporters gathered by Football Focus on Saturday would probably settle for the audiobook of Jacob Rees-Mogg’s autobiography over canned cheering, so appalled were they by the prospect of it. “It would make games sound like an episode of Friends,” said Alex.

Alex’s heart might have sunk, then, when Sky CEO Stephen van Rooyen said last week, after it was announced that the Premier League would be back on our screens from June 17th: “We have developed some terrific new innovations to give football fans the very best experience of watching live sport and we look forward to sharing these shortly.”

The biggest concern here is that they’ll make use of Yamaha’s Remote Cheerer system which, the Guardian told us last week, “allows fans following the match on TV to encourage – or berate – players via their smartphones, their voices reverberating around the stadium in realtime via loudspeakers”.

Not even George Orwell imagined anything that apocalyptically hellish, with the opportunities for abusing this system nigh on endless. What if someone recorded Daniel chatting to Majella in the car during their B&B Road Trip and that reverberated around, say, Villa Park as Jack Grealish stepped up to take the penalty that could save Villa from relegation?

Anyway, we’ll worry about Sky’s “innovations” when the time comes, for now English Premier League fans are just rejoicing at the prospect of it returning. “How do you feel, Alan Smith,” asked the Sky Sports News man. “Happiness. Joy. Excitement. All of those things,” he said in that monotone Brummy voice of his that suggested the last thing he was was happily, joyfully, excited.

Dan Walker, though, sounded ecstatic on Football Focus, his dog Winnie less so, possibly, like ourselves, fearing that once sport returns, Andrew Cotter won’t have time to make any more Olive and Mabel videos.

“Does it feel longer than three months,” Dan asked Alex Scott. Damn it, it feels longer than Liverpool’s title drought. “It’s like Christmas has come,” she replied, the prospect of 92 lives games on the box in just six-ish weeks a bit like all her Christmases had come at once.

“Football is the most important of the least important things,” said the West Ham fan in the supporters’ chat. Mind you, if they end up relegated, he’ll rue the day the football lockdown was ever lifted.