All In The Game: Ross Barkley is caught rapid with suspicious 5km time

Emanuel Adebayor says it as it is, quote of the week, word of mouth and more 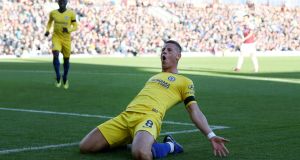 When Ross Barkley reported that he had run the 5k challenge in 16 minutes, 11 seconds nobody seemed more surprised than Chelsea supporters who often allege that his movement on the field of play is somewhat less than speedy. That his time was just four and a bit minutes off the world record set for the distance by Kenenisa Bekele had them scratching their heads in disbelief.

The official Chelsea website hailed his efforts – “Ross Barkley’s Immense 5k Time!” – but then, alas, the story took a turn.

A Twitter account by the name of – apologies – @StravaWankers examines the stats posted by those who use the exercise-tracking Strava app and who claim times that seem, well, a bit unlikely. So, they had a look at the stats posted by Barkley and concluded that he had indeed run a nippy 5k, but it was of the ‘interval’ variety – they reckon his time was made up of a series of sprints, the app paused after each one to give him a breather. This, they say, is against the, eh, spirit of the 5k challenge.

In honour of the player’s efforts, @StravaWankers have started the ‘Ross Barkley 5k Challenge’ in which they invite people to “complete the 5k in the fastest time possible using the sprint/pause technique”, adding a description of how they did it, eg “50 x 100 metre sprints down the steepest hill I could find with five minute rests in between while I nearly vommed”.

Poor Ross. Have Chelsea stood by him? Well, when you try to find that “Ross Barkley’s Immense 5k Time!” story on their website now, you get a ‘404 page error’. It’s disappeared. Just like Ross’s moment of glory.

The past few weeks we’ve been hearing a lengthy stream of stories about very generous footballers donating to various causes and charities during the pandemic, among them Samuel Eto’o who paid for a consignment of relief packages for his native Cameroon, and Didier Drogba whose foundation has funded the building of a new hospital in his home country of Ivory Coast.

Such generosity does, of course, put pressure on all wealthy football people to put their hands in their pockets, but it’s pressure that Emmanuel Adebayor has resisted, rather spectacularly.

In fairness to the fella, he has handsomely donated to causes in his home patch of Togo in the past, but he’s damned if he’s going to be told what he should do this time around, as he clarified in a Facebook video.

“I am neither the one nor the other, I am me, Sheyi Emmanuel Adebayor. A word of advice for the guys regarding donations: I will not do that. Everything is clear and very simple. Thank you and good day.”

“In a couple of months I expect to emerge looking like Michael Bolton.” - A barber-less Peter Crouch. Suddenly you’d prefer lockdown to never end.

100,000: That’s the £ bonus Alan Pardew is due after saving ADO den Haag from relegation ... but only because the Dutch season has been cancelled. They were seven points from safety with just eight games to play. When your luck’s in.

Ross Barkley isn’t the only Premier League footballer to have his activity claims questioned this weather, Harry Maguire also being greeted by some scepticism when he was trying to show that he’d been looking after his fitness during lockdown, rather than his sole exercise coming from trips between the couch and the fridge.

So, like Barkley, he posted a screenshot from his Strava app showing that’d he just done a 4.78 mile park run in 17 minutes and 46 seconds – not as blistering as Ross Bekele, but decent.

But? As the Daily Star noted, an “eagle-eyed follower spotted that the time and distance data was identical to a run that Maguire had posted two weeks previously”. We’re talking to the centimetre and nano-second here. Just a coincidence? Well, when the tweeter asked about it, s/he was blocked by Maguire who also used that Twitter function where you can hide people’s replies to your tweet.

“I was in a fruit and veg shop in the village and there was a thing up in the window that drivers were needed. So I volunteered. All I was doing was dropping it at the door, knocking and then going away. Beautiful big boxes of fruit and veg.” – First, Steve Bruce took up farming, now West Ham gaffer David Moyes is delivering fruit and veg. These are, indeed, strange times.

“I watch football a lot of the time completely without commentary, I want to focus on the game. I don’t want to hear anybody tell me number 11 has the ball now.” – Jürgen Klopp on the pointlessness of Martin Tyler, etc.

“It was like asking turkeys how they feel about Christmas.” – Mike Snoei, coach of Dutch second division side De Graafschap, who were on the verge of promotion before it was decided last week that no relegation or promotion would take place, the season cancelled, on the relegation-threatened clubs being given a say on the matter.