Quotes of the week, by the numbers, Alex Song’s financial honesty and more 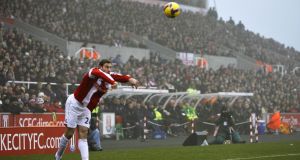 For quite a while, Rory Delap’s long throws were Stoke’s biggest weapon. Photo: Ian Kington/AFP via Getty Images

Choosing our favourite title of a dissertation linking a former Republic of Ireland international and his throw-ins with the financial crisis of the late 2000s from last week’s offerings wasn’t easy, but in the end we went with the 12,498 word effort submitted by University of Aberdeen student George Innes as part of his MSc Applied Statistics studies: “Blissful Ignorance: the Butterfly Effect’s place in Chaos Theory - A theoretical study into how the two goals scored by Stoke City straight from Rory Delap’s long throws in their 3-2 loss against Everton on the 14th of September 2008 directly led to Goldman Sachs and Morgan Stanley ceasing trading as investment banks on the 21st of September 2008.”

The frustrating thing here is that we won’t find out exactly how Delap’s throw-ins against Everton caused such financial carnage until Innes’ work is graded, because it’s only then that he’ll release his findings. He did concede, though, that the link is “extremely tenuous”.

Still, Delap spoke for us all when the Stoke Sentinel picked up on the story: “Eh?’

“Playing matches without supporters is sadder than dancing with your sister. It’s very ugly. I watched the German football and it’s lamentable.”

Spanish coach Luis Enrique has a severe dose of the lockdown blues.

100,000,000: That’s how many South Korean won (€74,000) FC Seoul have been fined for inadvertently filling their stands for a behind-closed-doors game with, eh, sex dolls. Accidents can happen.

Former Cameroon international Alex Song was in the news last month when he was sacked by Swiss club FC Sion for refusing to agree to the wage cuts introduced by the club as part of their effort to deal with the impact of the coronavirus crisis. Song, along with eight team-mates who were also sacked, is taking an unfair dismissal case to Fifa.

In an Instagram chat last week, though, he explained that money is rather important to him. It was back in in 2012 that Barcelona came calling, offering Arsenal €15 million for his services. But when he met the club’s sporting director he was told that he wouldn’t get to play many games, that he’d be signed as a squad player who would only be used occasionally.

Did he decide against the move, his only desire a guarantee of regular first team football, the prospect of only playing the odd gam too painful to bear? Did he heck. “I didn’t give a **** – when I saw how much I would earn, I didn’t think twice. I knew that now I would become a millionaire.” Top man. 11 out of 10 for honesty.

“I’ll ask you: if he’s so good, then why is he at Dortmund?” – Christian Siefert, CEO of the German league, managing to insult Erling Haaland and Borussia Dortmund in one fell swoop.

“I’d rather have a hole in the squad than an asshole.” – Ole Gunnar Solskjaer. Wonder who Graeme Souness thinks he’s referring to?

“Substitutes wear face masks and sit two metres apart in the stands, they warm up with a mask, then when they’re subbed on... it’s no longer infectious? Or do I just not understand?” – German international Max Kruse, as puzzled as the rest of us.

Since the publication of extracts from his autobiography ‘I Giorgi’, poor old Giorgio Chiellini has been worn out making apologies to people who were offended by his take on them, among them Mario Balotelli, Arturo Vidal and Felipe Melo. He doesn’t, though, need to make any apology to Luis Suarez having expressed only admiration for the fella, despite that shoulder-munching incident at the 2014 World Cup.

Suarez, you will recall, was banned for four months after sinking his gnashers in to Chiellini’s shoulder during the group game between Italy and Uruguay, so you might have thought the Juventus man would have had some harsh words for him in the book. Instead?

“The truth is, I admire his mischief. I called him a couple of days after the game, but he had no need to apologise to me. I too am a son of a bitch on the field – and proud of it.”