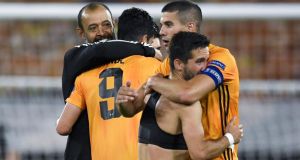 Wolves will be forced to play with a depleted squad if they qualify for Europe next season, after being found in breach of financial fair play (FFP) rules.

Uefa announced on Friday that Wolves had failed to comply with a “break-even requirement” during the 2019-20 season, finding that the club’s losses had been greater than €30 million over the year.

Wolves have agreed a settlement with Uefa under which they will pay at least €200,000 in fines, which could rise up to €600,000 depending on their compliance; they have also agreed to play with a squad of 23 players, rather than 25, should they qualify for Europe in the next two seasons.

Nuno Espírito Santo’s side face Sevilla in the quarter-finals of the Europa League after beating Olympiakos on Thursday, and would be entered into the Champions League if they win the competition.

The FFP rules are designed to stop clubs spending more than they earn, but were revised this year to allow clubs to carry greater losses in the 2019-20 season because of the effect of Covid-19 on their finances.

In the settlement, however, Wolves have agreed to limit their losses to €30 million in the financial year ending 2020. By the end of the 2021-22 season, the club will also be expected to have reached an “aggregate break-even” result for the years 2019, 2020 and 2021. Uefa rules allow for a buffer of a €30 million aggregate loss over three years within this definition.

A final condition will see Wolves submit regular updates to Uefa on their progress in meeting the FFP targets. They join six other European clubs – Galatasaray, Istanbul Basaksehir, FK Kairat Almaty, Maccabi Tel Aviv, Lille and Porto – in having their finances scrutinised by the governing body over coming seasons.

The effectiveness of the FFP rules has come under scrutiny since Manchester City overturned a two-year ban from European football – the toughest sanction under the rules – at the court of arbitration for sport last month.

In its written explanation of the Wolves verdict, Uefa’s club financial control body spoke positively of the club’s engagement with the process. “The club has presented a reasonable and realistic projected break-even information,” it wrote. “[This] should lead the club to have a break-even surplus or deficit within the acceptable deviation on the basis of the reporting periods ending in 2019, 2020 and 2021.”