Bohemians leapfrog Dundalk into second with win at Dalymount 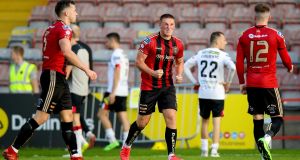 Bohemians leapfrogged Dundalk into second place in the Premier Division table with a deserved win over the defending champions at Dalymount Park last night.

Danny Grant and Keith Buckley found the net for the north Dubliners in the first-quarter, before the Lilywhites responded through Michael Duffy on 42 minutes. An equaliser ultimately eluded Dundalk, however, and they are now five points adrift of league leaders Shamrock Rovers with a game more played.

After weathering an initial storm, the Gypsies edged in front with seven minutes on the clock. Full-back Anto Breslin unleashed an enticing delivery and the raiding Grant was on cue to head home at the right-hand post.

Breslin operated in tandem with Kris Twardek down the left flank and it was the latter who provided the spadework for Bohs’ second goal in the 15th minute. Having forced Sean Gannon on the back-foot, the Canadian winger created enough space to cross into the Dundalk box.

The ball eventually fell at the feet of Gypsies skipper Buckley, whose firm drive was deflected beyond the reach of opposition netminder Gary Rogers. Faced with the prospect of a second league defeat in the capital this season, Dundalk manager Vinny Perth took drastic action just past the half-hour mark.

The experienced John Mountney was introduced for former Bohs man Daniel Kelly, with Stefan Colovic transitioning to the right wing. This paid dividends for the visitors as Duffy nodded home a delicious cross from Colovic with just three minutes remaining in the opening period.

This was the lifeline Dundalk craved and they were agonisingly close to levelling matters within 60 seconds of the restart. A Patrick Hoban header thundered off the crossbar and Mountney’s follow-up was turned away by Bohs netminder Stephen McGuinness.

While this was a let-off for Keith Long’s hosts, they continued to possess a potent threat of their own in the final-third. A superb Keith Ward cross-field pass released Grant on the right and his resulting strike was inches wide of the far post.

The influential Ward subsequently put Twardek through for a run at goal, but Rogers was equal to his final effort. In a bid to salvage something from the contest, Perth added Will Patching and Nathan Oduwa to the Dundalk mix.

They certainly persevered with their challenge as the final whistle approached, with both Daniel Cleary and Mountney firing narrowly off-target.

However, Bohs held their nerve to move within three points of arch rivals Rovers at the summit of the top-flight.