All in the Game: Bielsa’s forensic analysis reaches new levels

Meanest wager of the season; quote of the week; by the numbers and more 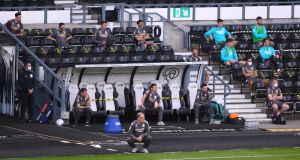 Leeds manager Marcelo Bielsa’s fondness for rather intensively analysing players, both his own and opponents, is the stuff of legend at this stage, but a piece in The Athletic last week suggested the process is even more exhaustive than we first realised.

He spent the bulk of lockdown in his granny flat in Wetherby doing video analysis on players, including 19 hours (he even counted them) on Alfie McCalmont, a 20-year-old midfielder in Leeds’ academy, “to properly grade his potential”.

Best of all was this particular revelation about earlier in the season: “One report on a bottom-end Championship club contained eight pages about their third-choice goalkeeper - a player who has not had a single minute of match action this season.”

“It’s like we’ve gone in to a war without a gun, and guess what? We’ve been shot.” – Norwich City sporting director Stuart Webber on his unarmed team’s relegation.

14: That’s how many managers Leeds went through since their relegation from the Premier League 16 years ago ... before striking gold with Marcelo Bielsa.

“I think Maguire goes home every day and tells his wife: ‘I screw up, but I earn so much! They really believe I’m good!’ I really think so. He laughs at everyone!” – Former Dutch international Rafael van der Vaart being quite rude about Harry.

“He is the most creative player in the best team in Europe and he is a 21-year-old lad from Liverpool playing at right-back. It just shows you what he has actually done to the position. He has made it sexy again shall we say after Gary Neville made it very unsexy.” – Jamie Carragher doffs his cap to Trent Alexander-Arnold while questioning Neville’s sex appeal.

“I don’t care if you’ve got Pep Guardiola sitting on José Mourinho’s lap, on top of Sir Alex Ferguson’s lap, on top of Arsene Wenger’s lap and all four of them are one manager: if you’ve got a defender who can’t pass the ball five yards to another defender, you are in trouble.” – Paul Merson, a touch impressed by Sead Kolasinac’s wayward backpass in the north London derby.

“If you ask Lewis Hamilton if he wants to win Formula Two or 3000 or whatever you call it, I don’t think it will be a great deal for him. But it’s a competition and I prefer to play Europa League than not to.” – José Mourinho’s enthusiasm for the Europa League continues to know no bounds.

“Leeds United are football’s equivalent of The Sex Pistols ... when we welcome them back to the Premier League, it’ll be a bit like saying, ‘Hello Sid, hello Johnny, we haven’t half missed you’.” – Stan Collymore. Nope, we didn’t get it either. Maybe we’re just pretty vacant?

“I call him ‘Little Chilli’, but in French – so it is ‘Petit Piment’. It’s because he is like a little chilli, so much energy, so much power and is quite small so it’s funny.” – Pierre-Emerick Aubameyang on his nickname for Bukayo Saka. Beats, say, ‘Buko’.

“David Silva is the new hero. The only player who could take that mantelpiece is de Bruyne.” – The one and only Micah Richards.

“As a United fan I’m happy to see Leeds United back in the Premier League where they belong. Congrats.” – Marcus Rashford’s congratulatory tweet to Leeds after their promotion – which he promptly deleted after getting dog’s abuse for being gracious.

Meanest Wager of the Season

We’re looking at you, Antony Johnson. Last summer the Londoner placed a bet on a certain footballer not only failing to score a single goal in the entire Premier League season, but also managing to avoid having even one assist. Who? Poor old Jesse Lingard.

Has Jesse made him eat his betting slip? Not quite – he has zero goals or assists from his 21 league appearances so far this season.

“Lingard making me sweat tonight,” Johnson tweeted when the fella came on for the last half hour of Manchester United’s game away to Crystal Palace last Thursday, but he didn’t break his duck, so the bet is still alive. “36 [games] down, 2 to go,” he said.

There’s a fair chance Lingard won’t even feature in those two remaining games, against West Ham and Leicester, having failed to make the bench for most of United’s fixtures since football returned. So, having bet £3.30 on him drawing a blank, Johnson could be £135.30 the richer come the end of the campaign. “That’s about all Lingard is worth,” said one especially horrible respondent.

Here’s hoping the ball brushes off Lingard’s bottom in to the path of Anthony Martial for a goal in the final second of the season.