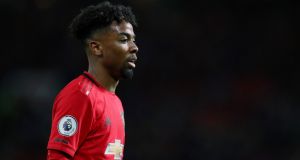 Angel Gomes has been loaned to Boavista after joining Lille. Photograph: Catherine Ivill/Getty

Former Manchester United youngster Angel Gomes has completed a move to Lille but will spend next season on loan with Portuguese club Boavista.

Gomes has signed a contract until 2025 with the Ligue 1 outfit.

The 19-year-old came through the academy at Old Trafford and became the youngest player since Duncan Edwards to feature for the first team in May 2017, aged just 16.

The attacking midfielder left Ole Gunnar Solskjaer’s squad when his contract expired earlier this summer, having been at Manchester United since the age of six.

Gomes’ appearances for United were limited, making just 10 since his debut three years ago.

A number of clubs — including Chelsea — had been linked with the England Under-20 international, but the midfielder has decided on a move abroad.

MeanwhilePhil Jones has not travelled to the Europa League finals due to a knee injury, Solskjaer has confirmed.

The 28-year-old has endured a tough season and made the last of eight appearances in January’s FA Cup fourth-round win at Tranmere.

Jones has been absent since football resumed after the coronavirus suspension through injury but was named in United’s 30-man squad for the Europa League final eight tournament in Germany.

However, the defender will not feature in the quarter-final against FC Copenhagen or beyond due to a knee issue that has seen him remain in Manchester.

“Phil has been following an individualised training programme during the post-lockdown period to optimise recovery from a knee problem,” United boss Solskjaer told the club website.

“It was a good opportunity as we had sufficient cover in defensive positions for the remaining Premier League games and he will continue to work with a fitness coach at the Aon Training Complex, while the squad are in Germany.”

Ethan Galbraith, Ethan Laird and 18-year-old defender Teden Mengi, who made his debut against LASK on Wednesday, are among those in the squad in Cologne.

Axel Tuanzebe and Luke Shaw were omitted from the updated Europa League squad due to season-ending injuries.