Carlsen throws shade at Firmino, knives out for Frank, quotes of the week and more 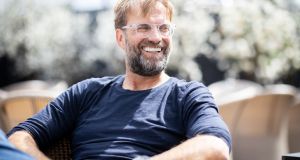 A documentary about Jürgen Klopp will air on Monday. Photo: The Royal Foundation/PA Wire

Liverpool devotees would be best advised to tune in to Channel 4 on Monday night (10.0) for a documentary on the gaffer, ‘Jürgen Klopp: Germany’s Greatest Export’, not least because it includes quite excellent footage of him appearing on a German quiz show in 1995.

The midweek afternoon show, on the ZDF channel, was called Verlieren Sie Millionen, meaning ‘Lose Millions’. Klopp, a beautician and a pensioner started with a million in the bank, the objective being to lose as much of it as possible by giving the wrong answers to questions. Eh, quirky.

In one round, you had to give the answer to the previous question. So, there were exchanges like: “What’s your name?” [silence]. “Who, in the role of Pretty Woman, shows her pretty legs?”

Klopp, alas, didn’t win, although he was most certainly the victor when host Mike Kruger attempted to have a giggle at the level of football he was playing at the time.

“Jürgen, what do you do for a living?”

“I am a professional footballer.”

“You play midfield at Bayern, we all know that. No, without laughing, where do you play?”

“In Mainz, in the second division.”

“Ah, Mainz, the ZDF canteen team! Okay, and what position do you play?”

A few years later, Klopp did indeed take Mainz to the Bundesliga for the first time in the club’s history. Did Kruger take Verlieren Sie Millionen to Saturday night television? Nope, it was cancelled after its pilot run. Who’s giggling now?

“I’ll forgive you for waking me up at 3.30 am to tell me you had won the league. Thank you. But anyway, you thoroughly deserved it. Well done.” – Alex Ferguson revealing that he received a very-late-night call from an exceedingly merry Jurgen Klopp to inform him that Liverpool were back on their perch.

“He was the first British manager I met and we had breakfast together. I’m not sure if he remembers it, but I remember it forever because it was for me like meeting the Pope.” – Klopp on his first audience with Fergie.

“It has been a tough year on a personal level. I don’t think the players saw their work recognised, I don’t think I saw my work recognised and we got zero protection from the club. We had to eat shit for months.” – Let’s just say, Antonio Conte has issues with Inter Milan’s owners.

“I gave him a few shots last night and got him to sign a new five-year contract. It was written in Sambuca.” - Aston Villa manager Dean Smith on getting Jack Grealish to commit himself long term to the club during their relegation-survival celebrations. Whether that Sambuca signature will hold up in court, we’ll see.

Magnus Carlsen knows his football, as he demonstrated last December when he went top of the Fantasy Premier League table, in or around 15 million places above most of us. But his most impressive expertise is in the game of chess, the Norwegian world champion regarded as one its finest ever exponents.

He was in sizzling form yet again during the recent Legends of Chess event, beating all around him, but such are the standards he has set for himself, he wasn’t entirely happy with his performances. Sadly, he had to drag a Liverpool legend in to his critical self-appraisal.

“It seems that in the last few matches, to use a football analogy, I am getting Lewandowski-level chances but I am converting them at a Firmino level. For those who don’t watch football, that’s pretty bad.”

Knives are out for Frank

If you had a look at FA Cup final-related tweets on Saturday afternoon you would have concluded that some folk out there haven’t heard of the maxim, ‘never kick a man when he’s down’. Like Joe’s Evan Fanning: “Impressive first season for Frank Lampard. Took Chelsea from 3rd to 4th; got six points fewer than Sarri; conceded as many league goals as Brighton; lost the FA Cup final to a fairly ramshackle Arsenal.” To which one meanie replied: “Having taken Derby from sixth to sixth.”

At least Lampard received some support last week when former Chelsea manager Avram Grant saluted him for that fourth-place Premier League finish, in light of the transfer ban that prevented him from strengthening his squad.

Did Avram leave it there? Not quite. “If I told Roman Abramovich some years ago that fourth place would be good for him, probably he would send me to Siberia.”