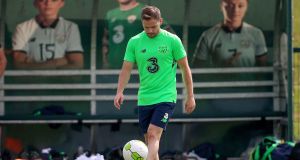 Alan Judge has joined Championship strugglers Ipswich Town almost three years after suffering a devastating leg break while playing for Brentford in a game against the club.

The 30 year-old, who was sidelined for almost two years after the incident, struggled to re-establish himself as a regular starter in west London after returning from the injury, a multiple fracture which required more than one operation,

Frustrated by the lack of opportunities at Griffin Park where he has been largely restricted to appearances from the bench in recent months, he has finally decided to move on and joins Paul Lambert’s Ipswich on a six month deal with an option for a further year. The fee has been described as “nominal”.

“I nearly signed here under Mick McCarthy a few years back and for one reason or another it didn’t happen,” said the Dubliner on Monday night. “Then he tried to sign me again last year but I wasn’t fit enough so it’s third time lucky and I’m really looking forward to it.

“It’s a deal until the end of the season and then we will see what happens from there. I’m just focused on playing some games for now, helping the team get up the table and enjoying my football again.

“The minute I spoke to the manager I could feel his enthusiasm for the club and that was enough for me. It was an easy decision. I felt wanted immediately and Paul has said to me to go out and play with confidence and try and make things happen. I’ll be giving everything to do that.”

Ipswich are currently four points adrift at the foot of the Championship table and seven off the safety of 21st place. Judge, who has scored 25 goals in 116 Championship games is set to go into the squad for Saturday’s game at Blackburn Rovers.