‘All we can do is win our games and be there and maybe one day they fail,’ City manager said 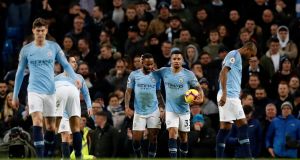 Manchester City closed the gap on Liverpool to four points with a win over Wolves. Photograph: PA

Pep Guardiola said he has no “magician’s ball” to tell him how many points Manchester City may need to defend their Premier League title following Monday’s 3-0 win over Wolves that cut Liverpool’s lead to four.

Jürgen Klopp’s side have 57 after 22 games and City claimed last season’s title with 100 points. After two goals from Gabriel Jesus and a late Conor Coady own goal Guardiola was asked what tally might be required to be champions again.

He said: “I don’t have a magician’s ball to discover how many. I said to them [players]don’t look at the schedule, don’t look at the calendar for the Liverpool games. Forget about it, [otherwise]normally when this happens in my experience you then lose your own games. And then it’s over. All we can do is win our games and be there and maybe one day they [Liverpool]fail; but if we don’t win, they will be champions.

“The best way is to look at the next game – [at]Huddersfield [on Sunday], who have a new manager. If Liverpool win the title, then I am sure I will congratulate Jürgen because it will be well deserved.”

Willy Boly was sent off for a 20th-minute lunge on Bernardo Silva. Nuno Espírito Santo had no complaints. “It’s very close to me and I think it’s a clear red card,” the Wolves manager said.

Silva confirmed Boly had said sorry to him. “It was quite a bad tackle but I’m fine. Yes, he did apologise at the end of the game. These things happen. You don’t do it on purpose, I think, and he said that. Everything is fine, it’s football.”

Of leaving Kevin De Bruyne and Sergio Agüero out of his starting team Guardiola said: “I have an incredible squad, [Ilkay]Gündogan made six or seven assists but didn’t [start]either. It is what it is. Today one of my favourite players, Phil [Foden], was not in the 18.” - Guardian services