Salah gets Liverpool back to winning ways at Brighton 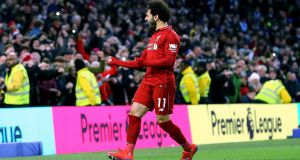 Lacklustre Liverpool ground back to winning ways to reaffirm their Premier League lead with a patchy 1-0 victory at Brighton.

Mohamed Salah struck his 14th league goal of the season from the penalty spot as the off-kilter Reds stretched their top-flight advantage over Manchester City back to seven points.

Liverpool failed to produce the kind of statement win to flex their title-challenge muscles following successive defeats to chief rivals City in the league, and Wolves in the FA Cup.

Klopp’s men laboured throughout, unable to generate anything like their trademark attacking zeal — but despite that malaise, the visitors still had enough to take all three points.

On this evidence Liverpool still appear to be coming to terms with losing their unbeaten league run in the 2-1 defeat at second-placed Manchester City.

But no one at Anfield will begrudge the win, with City hosting Wolves on Monday night with the chance to trim Liverpool’s league lead back to four points.

The visitors will have been heartened too by midfielder Fabinho’s assured showing as an emergency centre-back, especially with Joel Matip working back to fitness.

A listless Liverpool spent plenty of energy pointing, gesticulating and shifting the ball around from deep in a low-key first-half.

The Reds lacked any kind of pace or potency before the break, and deserved no more than to turn around with the game still goalless.

Liverpool’s best chance came when Xherdan Shaqiri’s header brushed the base of the post.

Roberto Firmino would surely have scored had he connected with Robertson’s low cross, but that proved a paltry first-half return for the league leaders.

An unmarked Glenn Murray headed high over the bar in Brighton’s sole chance of the half, but the regimented Seagulls would have been satisfied enough at the interval.

Liverpool needed just four minutes to break the deadlock after the restart, but the opener came courtesy of clumsy home defending rather than stunning attacking play.

Salah outsmarted Pascal Gross on the turn in the box, drew a cheap foul from the usually-unflappable German and then buried the cast-iron penalty.

Liverpool had designs on immediate domination after Salah’s cool spot-kick, but Brighton so nearly stole that thunder.

Itching to make amends for conceding the penalty, Gross popped up in the other box to put in a neat strike — only for Fabinho to pull off a fine block.

Jurgen Locadia’s long-range drive drew a solid save from Alisson as Brighton continued to press without reward.

The hosts’ puff all-but extinguished, Liverpool set about glossing the score late on.

1 Six Nations: Ireland are contenders but England still the team to beat
2 Gary Neville in Qatar an exercise in semi-journalism
3 Mike Catt hopes to have Irish backs purring in Six Nations
4 Owen Doyle: Creeping professionalism of schools rugby a threat to the game
5 Liam Cahill uses playing regrets to drive him as Waterford boss
Real news has value SUBSCRIBE