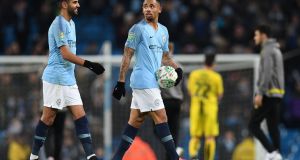 Gabriel Jesus’s first four-goal haul for Manchester City could not have been better timed. After Pep Guardiola’s pre-game stance that the Brazilian and Sergio Agüero have to compete to be his centre-forward it was a big chance to bid for the XI when Wolves visit on Monday evening.

Turn in the kind of high-energy display his manager loves and Jesus might begin to convince Guardiola he should dislodge Agüero, who was absent due to flu but is expected to train today. And, if Jesus could add to his eight strikes his case could be made even stronger – and Guardiola’s choice more difficult.

The 21-year-old’s tally as the contest started from 24 appearances was hardly prolific, and did not compare to Agüero’s, which stands at 12 in 21: numbers that make him the current first-choice.

Yet Guardiola’s words ahead of this semi-final first leg illustrate how much he wants Jesus to force the issue. “He competes with Sergio,” the 46-year-old said. “When they are fit they have to fight for their position.”

Staying out of the treatment room has proved difficult for Jesus, since his arrival in January 2017 from Palmeiras for a bargain price of £28m (€31m). A serious foot injury that spring was followed by a serious knee problem last spring: two maladies that allowed Aguero back into the reckoning, with Guardiola’s instinct being to prefer Jesus when both are available.

Yet this year Jesus’s numbers have fallen off dramatically: only three of the eight goals have been in the league – in 16 outings – at only 0.38 per match. For Aguero 10 of his 12 have come in City’s title defence – from 17 appearances – at 0.72 finishes in the 90.

This has caused Jesus’s trajectory to be mentioned more than once by inquisitors at Guardiola media briefings. The Catalan’s usual way of answering is to point to Jesus’s all-round contribution and how the goal count will rise again: a view proved prescient this evening.

On the quarter hour Jesus gave an illustration of the first point: dropping back to the centre circle to take the ball, feed it, and race into the area, only for Leroy Sane’s cross to miss his run as he pulled away from a near-goal melee.

Moments later Jesus made the long track back to be the first defender in the six-yard box – heading clear Marcus Myers-Harness’s corner from the left. By this juncture Kevin De Bruyne had already opened the scoring – a first header for City an example of the kind of killer edge Jesus can lack on occasion.

Now, though, he did show the prime marksman’s instinct. After Sane’s shot was repelled by Collins, Jesus reacted before four yellow-shirted opponents and that was 2-0.

This came from his head. A second arrived just minutes later – this time the left foot did the business and Aguero, now, was surely fretting about his place.

In what was becoming a duck shoot for City - following Oleksandr Zinchenko’s 30-yard lob beyond a blushing Collins – the task for Jesus was to keep on pressing his claim to the manager.

After City woke from an early second half slumber he did precisely this: Mahrez chipped in and there Jesus was for a second headed finish and second hat-trick of the campaign, following the three in November’s 6-0 drubbing of Shakhtar Donetsk here in the Champions League.

Better was to come. Jesus notched the personal quadruple – and City’s seventh – with a neat turn home of Sane’s low cross.

Phil Foden scored the side’s fifth, Kyle Walker the eighth and Riyad Mahrez completed a 9-0 rout that beat Saturday’s 7-0 hammering of Rotherham United at this venue to make this the highest win of the Guardiola era.