Ruthless Man City humiliate Burton to the tune of nine 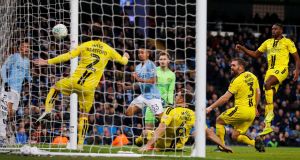 Long before the end, it was difficult not to feel a certain amount of sympathy for the players of Burton Albion. They had desperately wanted to cherish the memories of their first semi-final and maybe, in time, they will. Not here, though. Not with Manchester City swatting them aside as if dismissing a bothersome fly.

Maybe, amid this crushing demolition job, there was even a touch of empathy from the people responsible for overseeing the VAR arrangements. City might, after all, have finished with double figures but for the officials surveying the video and deciding, inexplicably, that Ben Turner did not foul Gabriel Jesus. It was, in fact, a clear penalty. Yet City were already leading 4-0 at the time and Jesus was denied the chance to score a first-half hat-trick.

Ultimately, though, that was only a minor detail on a lopsided night when City racked up a record semi-final win in this competition and poor Burton were made to look what they are: a team that is ninth in League One, though closer in points to the relegation places than the playoff positions. Jesus ended up with four goals and City have now scored 16 times in their last two games.

The only surprise, indeed, was that the reigning Premier League champions, 9-0 ahead after 84 minutes, stopped there against the team that currently stands 51 places – or a million light years – below them in the league ladder. To put it in perspective, Burton’s opponents in the same week ten years ago were Salisbury Town, in the second round of the FA Trophy, watched by a crowd of 1,472. Their entire squad has been assembled for £700,000 and their top earner, Liam Boyce, is on £3,000 a week – or to put it another way, roughly one hundredth of what Kevin De Bruyne, scorer of the first goal, rakes in. Nigel Clough had described it as hoping for a miracle or, from City’s perspective, the equivalent of a bye. And, sadly, it turned out he was right.

Nobody should really be too surprised by the imbalance in talent. Only three teams in history – Swindon in 1968-69, Chester in 1974-75 and Bradford in 2012-13 – have eliminated five sides from higher divisions in a single cup campaign. Burton had managed four but it quickly became apparent their latest opponents had no intentions of going the same way as Burnley, Aston Villa, Nottingham Forest and Middlesbrough.

Some of the players in yellow had not even touched the ball when David Silva clipped a cross in to the penalty area for De Bruyne to start the rout. De Bruyne had found a gap between Ben Turner and Reece Hutchinson to score a rare header and, after that, the night became an exercise in damage limitation for Clough’s team. In truth, it probably already was.

By half-time, Burton were four down and trying to avoid the kind of ordeal inflicted upon Rotherham during their 7-0 defeat here in the FA Cup on Sunday. City had also racked up seven goals on the last occasion they faced a third-tier side, Barnsley, in 2014 and the Burton fans who had made it through the chaos of the M6 had to fear the worst as the goals started flying in.

Briefly, however, something rather strange and unexpected happened, as the visitors started to pass the ball around and even had the temerity to threaten an equaliser. Marcus Myers-Harness scored a hat-trick at the weekend but when a golden opportunity came his way in the 11th minute he blew it, not even hitting the target.

If they were to stand any chance, Burton knew they had to be far more clinical and, sure enough, City duly took control with three goals in seven minutes. The first came on the half-hour mark when Leroy Sané played a one-two with Silva to get behind the visiting defence. Sané’s attempt to dink his shot over Bradley Collins was blocked by the goalkeeper but Jesus headed the rebound into an exposed goal.

Silva was also involved when City made it 3-0, squaring the ball across the six-yard area for Jesus to angle a low shot in off the post. Burton suddenly looked very lost and soon afterwards Oleksandr Zinchenko’s swirling shot, from an angle when most observers might have anticipated a cross, soared over Collins for the game’s outstanding moment.

Jesus completed his hat-trick with a fine leap to convert a Riyad Mahrez cross and his fourth goal of the night was a nicely clipped finish from Sane’s low delivery. In between, the substitute Phil Foden had made it six just a few minutes after replacing De Bruyne. Again, Jesus was prominently involved and, when the Brazilian’s shot was blocked, Foden was following up to tuck the loose ball into the net.

By that stage those of us in the press box were flicking through the history books to check City’s records. As it was, they still had some way to go before emulating the 12-0 against Liverpool Stanley from 1890. Mahrez prodded in the ninth and that, thankfully for Burton, was that. – Guardian service