Harry Kane reminds Chelsea of the importance of strikers

He has worked away at the margins, made it so the percentages will always favour him 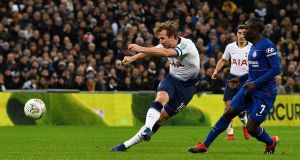 There is, of course, no such thing as a sure thing. No guarantees, no certainties. Except, now and then, when there is.

As Harry Kane stepped back from the penalty spot with 26 minutes gone at a chilly, boisterous Wembley Stadium he didn’t bother to frown or compose himself. He didn’t take a deep breath and look troubled, as he might have just for form’s sake.

Instead he stood for a second, stepped forward and spanked the ball with the top of his boot into the corner past Kepa Arrizabalaga, who made a token flinch with his right arm, reduced to a piece of scenery in another man’s five-second short movie (working title The Centre Forward’s Complete Absence Of Fear Of The Penalty).

Kane wheeled away, remembering to look overjoyed, or at least vaguely surprised at this turn of events, his seventh goal in his last six games for Tottenham.

Kane has been described as a star player without any obviously extreme qualities. Watch him warm up before a game and you realise this overlooks the fact that when it comes to spanking a ball at goal he is prodigious, hypnotic, utterly thrilling in his power and accuracy.

Some players waft the ball into the crowd during those drills. Kane simply murders it into the corners over and over again. It isn’t luck, or a coincidence or goal-hanging that means this keeps happening. He has just worked away at the margins, made it so the percentages will always favour him; become, in effect, a sure thing.

This was the only real lesson to be drawn from what was at times a strange Carabao Cup semi-final. Chelsea had 17 shots to Tottenham’s six. Eden Hazard was mesmerising in the second half, sniping constantly into space, gliding past the white shirts like a ghost in blue. And yet for all their pressure, their 57 per cent possession, the closest Chelsea got to scoring was a deflected first-half cross.

But then, they didn’t have Kane. Or, indeed, any kind of centre-forward at all, lining up with a three-man front line of Willian, Eden Hazard and Callum Hudson-Odoi: three fine players full of craft and cleverness who between them have five goals in Chelsea’s last 20 matches.

For all its complexities, its deep theory, so much of football’s narrative is reverse-engineered out of the finest details: choosing the right centre-forward, for example, and then playing him the right way.

Besides scoring the only goal, Kane was quietly brilliant at Wembley, playing in his slightly adjusted role with Son Heung-min so high up the pitch. It is a semi-10 position that brings out his ability to spin and pass in deeper spaces. Kane had spent a part of the autumn looking drained, reduced to walking backwards through the centre circle, hands groping out for a defender to wrestle.

He has recovered his mobility, found the freedom to make those veering sprints that drag opponents into horrible places. Midway through the first half he ambled back into his own half, took the ball on his chest with an agreeable thud and volleyed a spectacular crossfield Harry Hollywood pass into the path of Son on the far side.

The run for the goal was the best part. When Kane can sprint behind the defence from halfway then he has the whole quiver of arrows at his back, good enough to hold the ball there, but also to hare away from Antonio Rüdiger before being bumped to the ground by Arrizabalaga.

Kane had been flagged offside. VAR suggested he was on, or on enough. The rest was a formality, a tick in the box, and a lesson too in the importance of that simple cutting edge.

Hudson-Odoi played well without ever looking totally settled. It isn’t hard to see what so many have seen in him already. With 20 minutes gone he took the ball by the touchline, rolled his foot over the ball and just glided past Harry Winks with an easy little surge of speed. Hudson-Odoi may yet be off to Bayern Munich in search of game time. At the same age Kane was sharpening his teeth at Millwall, but then not everyone can be quite so fortunate.

And for all their second-half pressure Chelsea’s edge was elsewhere at Wembley: sitting on the bench to the 79th minute in the shape of Olivier Giroud, or absent completely in the form of the injured Álvaro Morata, a £60m, quadruple league-winner, double Champions League-winning centre-forward who may or may not be any good, nobody really knows for sure.

For now they are all some way short of Harry, the greatest hunch any modern-day Spurs manager ever had, the gift that has kept this Poch-era team rolling along through the turbulence of the stadium years – and the edge that makes all the difference on nights like these.