The body count is already high before Wales visit, Metallica a misjudgment at the Aviva 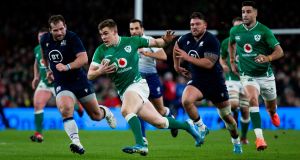 Four bodies per game. The rate of attrition for this Six Nations has been set. If Dave Kilcoyne and Caelan Doris complete the return to play protocols inside seven days - which would, considering the force of impact both suffered, send a worrying message about the current treatment of concussion in rugby - and Tadhg Furlong’s screaming calves recover, Ireland may only be without Garry Ringrose when Wales pass through Dublin next Saturday.

Of course, that’s not how this tournament works. The toll will rise, not fall. There is a brief respite before Twickenham on February 23rd but Andy Farrell must be keenly aware that the damage which undid his predecessor could revisit the group in 2020.

It’s happening already. Ringrose’s departure at half-time radically altered the way the team could attack. He was superb as a second distributor in midfield and while Robbie Henshaw possesses multiple gifts, playmaking is not one of them. Henshaw remains the easy alternative at 13 but Will Addison, or less so Chris Farrell, would offer much needed creativity.

Peter O’Mahony is the obvious starter if Doris needs longer than a week, but Max Deegan’s running game would bring a new dimension. The extra minutes Furlong and Cian Healy racked up - covering for Kilcoyne - almost demands rotation so they are ready for England. And anyway, Andrew Porter has earned the right to start a major Test match. Same goes for John Cooney at scrumhalf and Ronán Kelleher at hooker.

Iain Henderson was as powerful against Scotland in the World Cup as he was on Saturday, but the Ulster lock struggled six days later against Japan. Perhaps Devin Toner should start with Henderson to cause havoc in the last 30 minutes.

That’s multiple changes - creating a world class bench - but this might be the only way Ireland make it to Paris with enough bodies to win the title. The last defensive dive into hell against the Scots proved that attrition remains Farrell’s true enemy.

We need to talk about Sevens. The Olympic dream of competing at Tokyo 2020 is rapidly fading. This bastardised version of rugby union is basically a travelling circus that pitched up in Sydney last weekend.

Ireland have been developing the sport since 2014, when the IRFU turned to Australians David Nucifora and Anthony Eddy to run their high performance department.

It is vital for player development, they say, and maybe so, but results are beginning to bring the programme’s effectiveness into question. Sevens has polished the odd gem for 15s, like Robert Baloucoune, but during the men’s first season on the World Series it has become painfully obvious that the IRFU have not invested sufficiently to compete with established nations.

Last year Gerry Thornley revealed that contracted players only get a basic salary of €18,000. They would earn more flipping burgers. In case you, understandably, missed it over the weekend the men and women continued their pattern of losing the games that matter. Eddy’s men were taken apart by Canada and England before finishing a respectable seventh with victory over Argentina while Stan McDowell’s women stuttered against fleeter-footed French and Aussies.

Currently, the Irish women are ranked 10th of 14 with the men sitting ninth of 16 after four tournaments. Maybe the shoe string budget allows the slow burn to continue indefinitely but, right now, the Irish Sevens teams are struggling.

Enter Sandman by Metallica is a tune to psych up the most timid soul but blasting it around the Aviva stadium seconds before Stuart Hogg’s kick-off was a tone deaf decision. This is the Six Nations; the crowd can generate their own noise, so why drown out the sense of anticipation?

Metallica can be incorporated into any sporting event but this was a needless call, lacking awareness for what this occasion is all about.

Music at games should be background noise, a subtle filler, nothing else.

“I honestly didn’t hear that as the coaches box is sound proof,” said Andy Farrell who we suspect is a Stone Roses disciple. “That’s why I want to go outside, I like Metallica.”

Other performances to note from the Aviva include a career low performance by referee Mathieu Raynal and Stuart Hogg’s insult to schoolboy rugby players all over the world after the Scotland captain once again showcased the stupidity of one handed attempts at try scoring.

“Just a schoolboy error,” said Hogg. “Gutted with how that happened. I can’t change what’s happened now. I just need to get on with it. I apologised to boys. What will be will be and we have to move on. I’m bitterly disappointed to drop ball over the line.”

It cost Scotland victory or at least the draw. “What will be will be” kind of erases the apology. Scotland’s aggression was commendable but they are off to Never Neverland if their captain is making these mistakes.

“I can elaborate on that because (Sexton) won’t. He had not done any rugby training whatsoever until we touched down in Portugal. How long was the rehab altogether, eight nine weeks? For him not to touch a ball, not to fight in anger until Thursday of this week, that says it all about the man really. To have the pressures of desperately wanting to lead his country for the first time and all the new bits coming around that and deal with coming back from such an injury and lead the team like he did, hats off to Johnny that’s a magnificent effort.” - Andy Farrell on Johnny Sexton.

1 Gerry Thornley: Wild reactions to this Ireland team as fickle as the wind
2 IRFU not consulted prior to Minister Harris’ recommendation to cancel Ireland v Italy
3 Cheltenham keeping a watching brief on coronavirus
4 Dan Tuohy explains ‘rotten to the core’ comments
5 Five Golf Classics for you to tee up at in 2020
Real news has value SUBSCRIBE