Matt Williams: Scale of the catastrophe in Australia is like nothing I have ever seen

Death, destruction and polluted air the byproducts of unprecedented bushfires 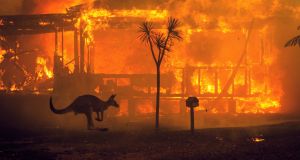 A kangaroo rushes past a burning house in Lake Conjola, Australia, on the last day of 2019. Since August, nationally the number of lost homes is over 1,200. Photograph: Matthew Abbott/The New York Times

The Six Nations, Heineken Cup and the Pro 14 are really not that important when a raging bushfire attacks your home.

Johnny Sexton’s knee injury very quickly drops down the list of important issues in your life, if flames are in your garden.

I have spent Christmas and New Year in a Sydney that I have never seen before. Things here have changed dramatically. Since August bushfires have destroyed an area the size of Belgium. The scale of damage and the ferocity of the fires is indescribable.

In Australia it is also the height of the rugby pre-season. High-intensity and high-volume training will ramp up again next Monday as the players return from their short Christmas break.

Athletic performance coaches will have to condition their athletes in air the government describes as dangerous to public health. The smoke from the fires has seriously polluted our once pristine air.

On New Year’s Day the air quality in Canberra was 23 times above recommended levels of safety. Forget Calcutta, boring little Canberra, usually full of hot air from our knuckle-headed politicians, has the most polluted air on the planet.

Both the Brumbies and the Waratahs will return to training in air that we know damages human lungs. Since I arrived back in Sydney I have not seen one day of blue sky. The smoke haze never leaves.

On New Year’s Eve the south coast of New South Wales and Victoria ignited. Farmers were dragged from their land. The Mogo Zoo keepers turned on the water sprinklers and tearfully left their animals. Shopkeepers walked out of their businesses and townsfolk abandoned their homes. They fled to the sanctuary of the ocean and stood on the beach to witness the fire storms rage.

The surf lifesaving clubs that dot every main beach around Australia once again proved that they are not only amazing production lines of sportsmen and women but they are the hub of the community.

The roads out of many of these small coastal towns were blocked. There was no escape, so the surf clubs opened their doors to the thousands of holidaymakers who had nowhere else to go.

Some towns too far away from the safety of the beach were surrounded by what must have seemed like Armageddon. Towers of flame belching unimaginable volumes of smoke trapped the insect-like inhabitants on all sides.

These fires do not travel, they explode. You cannot outrun them. You can’t fight their enormity. You have to get away early and fast.

If you can’t get out, you are in deep trouble. The surrounded towns folk fled to the only bare space in the area, the batting pitch in the middle of the local cricket field.

The trapped bushfire brigade trucks surrounded the people as a last bastion of defence as they huddled, waited and watched the tsunami of fire explode over them. What those people witnessed I can only imagine.

The intensity of these fires heats the air to such indescribably high temperatures that the fire creates its own weather.

In South Australia, the intensity of the fire created a tornado that somersaulted an 11- ton bushfire brigade truck. Flipping it end over end, landing it on its roof, killing a young volunteer fire fighter.

Compared to this, whether Ulster, Munster, Connacht or Leinster selected weakened teams for the interpros is simply not important.

Unlike Europe, fire is a natural part of Australian forests. Many of the trees regenerate and seed after fire passes through. But scientists are concerned the prolonged drought has caused unprecedented ferocity in these fires and this could have unforeseen consequences on the forests regrowth and the animals that live there.

Meanwhile our politicians continue to engage in culture wars on climate change, the drought, water management and our environment. In the face of such human tragedy common sense should have forced a bipartisan approach. Not in Oz.

I am not describing a corrupt banana republic. Tragically, I am talking about Australia

The custodians of the Lucky Country, on both sides of politics, are a bunch of weak, self-serving bastards.

Fanaticism has placed so-called conservative free marketeers at odds against science, resulting in political inaction as the country literally burns.

This leadership vacuum means that on Monday when the Waratahs and Brumbies return to training in preparation for season 2020, the air will be so polluted that it will be unsafe to breathe.

The cricketers playing the third Test between Australia and New Zealand at the Sydney Cricket Ground, will have the air quality monitored and play may be suspended if it is regarded as unsafe, as the players stand in another series of days in temperatures over 40 degrees.

The scale of these fires is so huge that humans cannot put them out. It will take a lot of rain to extinguish these fires. If no rain comes, as it has not for the previous five years, then the fires will keep burning and smoke will still be here when Ireland play the Wallabies at the SCG in July.

On the last day of 2019 over 300 families lost their homes and every material possession they held. Since August, nationally the number of lost homes is over 1200. But that is nothing compared to those who have lost their lives.

What I am witnessing here is like nothing I have ever seen. Political ineptitude, wild fire, destruction, death, air so polluted it damages our lungs and the possible suspension of elite sport.

I am not describing a corrupt banana republic. Tragically, I am talking about Australia.