Racing to a standstill: Mike Prendergast on life under lockdown in Paris 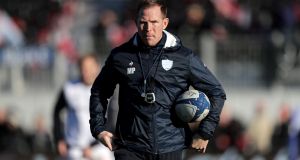 Racing 92 coach Mike Prendergast is in Paris with his family during the coronavirus outbreak. Photograph: Laszlo Geczo/Inpho

“I went down to the shops Saturday morning and it was eerie. Handful of people walking the streets. Everyone wearing masks. Saw some people with suits on. I f**king headed home then.”

The French version of HG Wells’s ‘War of the Worlds’ currently on Canal+, conjures the same imagery as a conversation with Mike Prendergast.

“There are helicopters and drones going around so people are staying in.”

With France in lockdown, punishable by €375 fines, the Racing 92 coach, a Munster scrumhalf in another lifetime, is holed up in the western suburbs of Paris with his ever expanding family.

Apartment living in Boulogne, nestled between Rolland Garros and Parc des Princes, has been utterly altered by the new normal.

“We need a cert to leave the house. And it has to be for necessities – shopping, pharmacy or to see a doctor. You can walk but not more than two kilometres but you have to be on your own.”

We eventually talk some rugby but only after the 42-year-old attempts to explain how a pregnant wife, teenager and four-year-old avoid cabin fever.

“It’s tough having to stay in the apartment. We are looking after each other. We can’t get out so we are okay.”

Like so many, the real worry is out of reach, in Limerick.

“My dad passed away a couple of months ago so my mum is at home alone. It’s them you worry about more. It seems to be quite well managed [in Ireland] but we could manage it really well if that other group of people bought into it.”

Images of the “other group” queuing for chips in Howth are discussed with the conclusion being similar to what the French government already decided; in crisis people need to be told how to behave. We discuss the clarity of Dr Mike Ryan’s WHO briefings “and that doctor from Limerick the other night” said Prendergast of the ICU specialist Dr Catherine Motherway’s stern warning on Primetime (highlighted in rugby circles by a Paul O’Connell tweet).

“She was very good. One of those women who does not f**k around. Straight to the point. I know she put the shits up people but she needed to.”

Anyway, despite the lack of grass between toes, the Prendergasts are doing fine.

“It’s lovely over here at the moment. Sunny and about 15 degrees but we are cooped up. Because my wife is pregnant we have to be a bit more cautious.

“So, over the next few weeks, appreciate your ability to have a barbeque or whatever. To be honest with you, seeing friends at home being able to do that makes me happy. But what worries me is people at home.”

Elderly parents are being exposed to the infected because so many are unable to comprehend the seriousness of what is happening in China, Iran, Italy, Spain and now France.

“I think there is an older generation here. I was talking to Rog the other day. Now Rog is cool as a breeze, nothing would bother him that much, but as he said he was a small bit nervous I was seeing people in our small apartment block heading off to Normandy or down south to a house and garden.

“Next thing I see online the train stations are mobbed. Rog said the amount of people heading into La Rochelle is phenomenal. They wouldn’t have the hospitals down there to cope so there is a ban on the beach. Rog is saying that 40 metres outside his house the cops are straight over ‘What are you doing?’ I live in there. ‘Get back in.’ He was with his young fella. ‘Not together, you can go individually.’”

The migration of city dwellers to the countryside has created a problem that Irish people must not ignore.

“People in France can be born in a city but not be attached to it. Even in rugby. They all move around to four or five clubs in their career. People move to cities and it is not an upheaval as a lot don’t own houses. They move and they rent. But as they get older they retire, with a bit of money, and tend to head down south. Apparently, they are freaking now as people living in Paris are all heading down and spreading [Covid-19] all over the place to this older generation.”

Prendergast the coach – having linked up with Racing 92 this season after stints with Young Munster; Grenoble during Bernard Jackman’s reign; Oyonnax and Stade Francais alongside O’Connell – should be shaping one of the most stunning backlines ever assembled for a two-prong assault on the Top 14 and Champions Cup. Instead, he’s doing what little he can from confinement.

“The players have been warned to train only up to 80 per cent of what their max is because you can have it without knowing it, especially if you are young and fit, and if you train [too hard] there can be [side] effects.

“We have two full-time docs at Racing . . . the boys have programmes but they have been warned not to go overboard.”

His next conversation is with a World Cup winner.

“Felix Jones was texting last night so we will catch up. Try and share ideas as much as you can over the phone. Keep preparing in case we do get back or be ready for next year.

“Until then just spend some family time and stay safe. Stay in.”

Even though you are heavily outnumbered?

“All women! Hopefully a little boy will pop out in the next couple of weeks.”

[The future is unknown but several contingency plans are being hatched by Racing head coach Laurent Travers.

“It all depends on how bad it is but, if it clears, we could play into July. The All-Ireland league is finished up purely because they are only insured up to May.”

The best case scenario for the French clubs – whose presidents met Monday – is pre-season in May with the Top 14 split into a top eight contesting for the Bouclier de Brennus while the bottom six enter a relegation playoff. This would be preceded by the knockout rounds of European rugby being played over three weekends in May and June. The alternative is cancellation with no relegation and a Top 16 next season.

“Everything’s very much up in the air,” Prendergast adds. “[Emmanuel] Macron came out last Tuesday and said he wanted everything shut down. The penalty [for breaking quarantine] I hear is €375.

“Macron also announced there would be a fund of €300 billion for when this moves on and no small business would go under, he has promised, and that includes your ProD2 clubs, as many of them won’t be able to stay afloat. He has said they won’t be taxed until they are back on their feet and he put a hold for people struggling with mortgage and bills.

“There is a feelgood factor to those announcements; if you ‘stay in’ there will be rewards at the end. Same goes for amateur rugby, which is finished for the season, with Bernard Laporte announcing a pot of €35 million.”