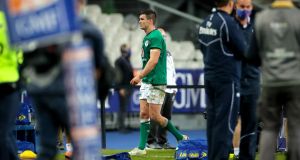 Johnny Sexton was clearly displeased to be substituted with ten minutes to go in the defeat to France in Paris. Photograph: James Crombie/Inpho

Les misérables defeat at Stade de France will fester alongside a label that is beginning to stick. Ireland hardly need reminding that their last substantial victory dates back to November 2018.

In the meantime, England, Wales when it really mattered, England, Japan, New Zealand, England and France have had the better of them physically and strategically.

There is no getting away from this. Come November 21st Twickenham promises another examination of the highly insulting notion, as stated by Rassie Erasmus, that Ireland are “soft”. The former Munster director of rugby’s comments lingered in the cold Paris air.

Johnny Sexton did not want to leave the pitch with 10 minutes to play and eight points between the teams. Imagine the Green Bay Packers benching Aaron Rodgers in the fourth quarter of the NFL play-offs.

“I don’t think there was any malice in that,” said Andy Farrell of Sexton’s unmistakable tantrum. “I think he was more disappointed with the stuff that we’d done to be fair to him really.”

Still, the coach and captain appeared at loggerheads over the former’s decision to remove the latter.

Reinforcements are coming but, in the meantime, the residue from 2019 paints the picture of an Ireland team incapable of out foxing bigger packs. Selection must be ruthless now.

The attack will be strengthened by Keith Earls and James Lowe with Ryan Baird, Tadhg Furlong, Iain Henderson, Ronán Kelleher and eventually Dan Leavy capable of altering the growing perception. But we know how that goes; Garry Ringrose and Max Deegan will be joined by others at the bottom of rehabilitation hill.

Paul O’Connell was right on BBC; Sexton was wrong last year; nobody will be calling for his or Conor Murray’s heads any time soon. What Farrell must do is build a cohesive structure around them, so the veteran half backs can drag Ireland out of this rut.

Jacob Stockdale needs to tune into his own frequency again. Denis Hickie travelled down a similar dirt track a year after his international debut.

“You got to get down on that ball,” Jamie Heaslip tweeted about Stockdale’s failure to snuff out a French attack, leading directly to the penalty try.

This was a shambolic performance at fullback by an athlete in possession of that rare combination of speed and power. Maybe he needs to grow his hair out or take the coins from his left pocket and put them in his right. Hypnosis is another way to go.

Stockdale’s pirouette and try at the finish showed resilience but his catalogue of unforced handling errors was highlighted by his predecessor’s impression of Mick McCarthy on Virgin Media.

“It is just simply a lack of concentration,” said Rob Kearney before following up with the worse type of analysis an ex-teammate could offer, pity: “Greasy balls are difficult to take sometimes.”

The second half was barely alive when Romain Ntamack scored a try that will live comfortably beside his father’s slickest effort.

“Could Jacob have worked a little bit harder, earlier, to get that ball before it bounces?” wondered Kearney in studio.

The former Ireland fullback feeling compelled to question the work ethic of the incumbent Ireland fullback will be tough for Stockdale to hear but not as tough as a slippery night in Paris when his brain was fried.

“They are not softies, they’re not like Ireland. They’re not like England, who goes away. They are tough fuckers.” – Rassie Erasmus, on the Chasing the Sun documentary, describes Wales.

“Yeah, you’re correct, there’s times in the last 20 months when we haven’t won those [matches against powerful teams] and that’s all clear for people to see.” – Ireland forwards coach Simon Easterby.

“On October 9th, World Rugby became the first international sports governing body to institute a ban on transgender women competing in global competitions like the Olympics and the women’s Rugby World Cup.” – The New York Times takes an interest in “rugger”.

€2.5 million – the prize money for Ireland finishing third in the Six Nations

Has to be Felix Jones. The Springboks are facing an entire calendar year without Test matches after sensibly rejecting an invitation to join a completely lopsided Rugby Championship hosted in Australia against battle-hardened Wallabies and All Blacks.

But the world champions have produced a sports documentary – which neatly sidesteps this week’s Aphiwe Dyantyi doping trial – that caused more than a stir at Ireland’s Captain’s Run press conference in Paris last Friday.

Erasmus took to Twitter to defend himself, stating “context is important” as Wales were in the ’Boks sights when he made the remark.

“They are probably the hardest team that I have analysed against,” said Jacques Nienaber, the former Munster defence and current South Africa head coach about Warren Gatland’s Welsh side in 2019.

“They are not softies, they are not like Ireland,” Erasmus told his players.

Flash to Jones – capped 13 times for Ireland – at the top of the Springboks’ team room in Japan, acting as guinea pig as Erasmus shows how Welsh players like to rip the ball loose in contact. No Irish coach on the planet has had similar exposure and that’s why Jones wins the prestigious offloader of the week, an accolade that can be treasured alongside his World Cup medal.